Is Kim Kardashian giving love with another NBA player a thought? Find out if the reality star wants to catch a case of the Linsanity that’s going around the country. 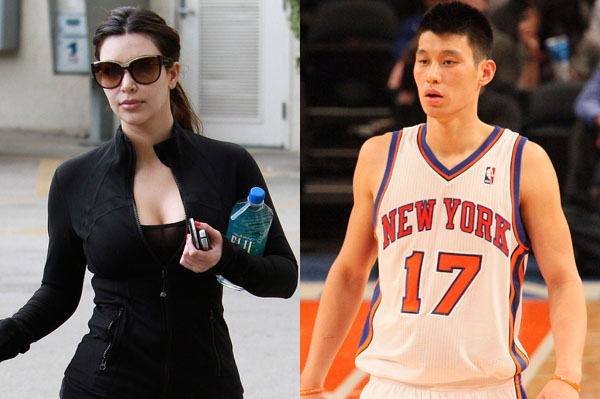 Kim Kardashian’s ex-publicist, Jonathan Jaxson, ignited the family’s furor when he admitted that he staged various publicity stunts for his client. The Kourtney & Kim Take New York star denied it at the time, but her current publicist might be up to the same tricks.

“She thinks [Jeremy] is cute, and she’s good friends with [Jeremy’s teammate, Carmelo Anthony’s wife] Lala. It’s going to be a double date,” a source told the website on Thursday of the planned “date” allegedly being orchestrated by her publicist.

Lin is said to be “excited” to meet her, according to sources. The problem? It’s not true.

“This is not true and there’s never been any conversations about this,” a Kardashian source told The Huffington Post. SheKnows has also reached out to her rep to get the official word on the story.

We can’t really blame anyone for thinking she’d actually do something like this — E! producers reportedly approached another Knicks player, Danilo Gallinari, in 2010 for a date with the reality star. He turned it down.

“Danilo said he would love to meet Kim but was not interested in dating her or being on a reality show,” a source told the U.K.’s Daily Mail. “Even though E! explained it would be great for his career, Gallinari turned the offer down.”

Kris Humphries did agree to it — and we all know how that turned out.

However, Reggie Bush’s ex told Allure that she wants to keep all future relationships private.

“Whenever I choose to get into [a relationship] again, I’m not ready, but when that time comes, I’ll be more cautious about who I let my world open up to,” she said. “People [think] because you film your life on a reality show, you live everything for the cameras. But we all have our limits. My mom has no limits. We need someone, right, to have no limits? That’s my mom.”

Well, we don’t think she’d turn down the attention that comes with dating Jeremy Lin if given the chance.

Do you think Kim Kardashian should date Jeremy Lin?