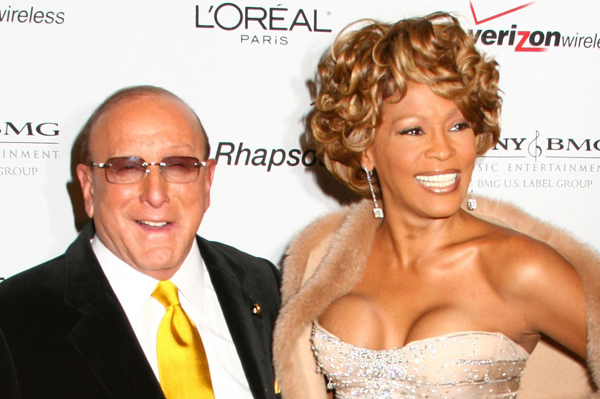 Though Whitney Houston spent most of her adult life battling her personal demons, those who collaborated with her throughout her career reflect on memories with the late legendary singer.

“I am devastated by the loss of someone who has meant so much to me for so many years,” said producer Clive Davis on the passing of Whitney Houston. “My heart goes out to her daughter, Bobbi Kristina, to her mother, Cissy… to her extended family who loved and cherished her and her spirit. Whitney was a beautiful person and a talent beyond compare. She graced the stage with her regal presence.”

Songwriter Diane Warren wrote “I Didn’t Know My Own Strength” for Houston after her split. “It’s basically, ‘Survived my darkest hour… I picked myself back up.’ Because she was doing a comeback record, she got divorced from Bobby Brown, and going to kick ass again, like she always did. It was an amazing experience because I was actually in the studio with her,” said Warren.

“David Foster produced it, and he was kind of afraid: ‘Will she be able to hit those notes after damaging her voice a little bit?’ Being in that room when she wrapped her voice around that song and hit those notes, I was sitting there and crying.”

The Bodyguard director Mick Jackson narrated the experience of working with her. “‘I Will Always Love You’ was virtually the last thing we shot in the movie. We shot it live in the Fontainebleau hotel ballroom in Miami in April 1992,” he said of the project from almost 10 years ago.

“You hear that song and you hear her as she goes through it — not just demonstrating this amazing vocal talent that she had but just living through emotions that you’ve seen her go through in the movie in the song. And that’s a lasting thing.”

Country singer Dolly Parton, who originally wrote and recorded the hit “I Will Always Love You,” reflected on the Grammy Awards’ touching tribute.

“I was brought to tears… when Jennifer Hudson sang, ‘I Will Always Love You’ on the Grammys in memory of Whitney,” she said. “Like everybody else, I am still in shock. But I know that Whitney will live forever in all the great music she left behind. I will always have a very special piece of her in the song we shared together and had the fortune to share with the rest of the world. Rest in peace, Whitney. Again, we will always love you.”