Stephen Colbert was mysteriously missing from the taping of The Colbert Report on Feb. 15. Find out the reason behind the sudden cancellation. 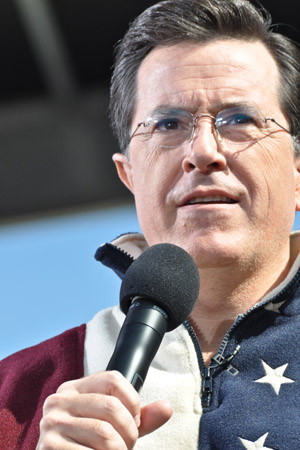 Fans with tickets to the Feb. 15 taping of The Colbert Report were disappointed when they were turned away at the doors. The host, Stephen Colbert, was supposed to resume live shows on Wednesday after a week of vacation, but those plans were canceled.

So, what gives? Some fans speculated that Colbert’s absence has something to do with his Super PAC and fake bid to run for the President of the United States of South Carolina. It doesn’t look like he’s in legal trouble, though. Instead, a Colbert “family emergency” is cited as the reason for the cancellation, according to the Washington Post.

The comedian is in character the majority of the time he’s in public. However, Colbert is actually very religious, something he credits to the plane crash deaths of his two brothers in 1974.

“There’s a common explanation that profound sadness leads to someone’s becoming a comedian, but I’m not sure that’s a proven equation in my case,” he told the New York Times in a recent profile.

“I’m not bitter about what happened to me as a child, and my mother was instrumental in keeping me from being so. She taught me to be grateful for my life regardless of what that entailed, and that’s directly related to the image of Christ on the cross and the example of sacrifice that he gave us. What she taught me is that the deliverance God offers you from pain is not no pain — it’s that the pain is actually a gift. What’s the option? God doesn’t really give you another choice.”

Read on for more Stephen Colbert