Kobe Bryant and his soon-to-be-ex, Vanessa Bryant, were spotted kissing after a Valentine’s Day basketball game. Are they giving their relationship another chance? 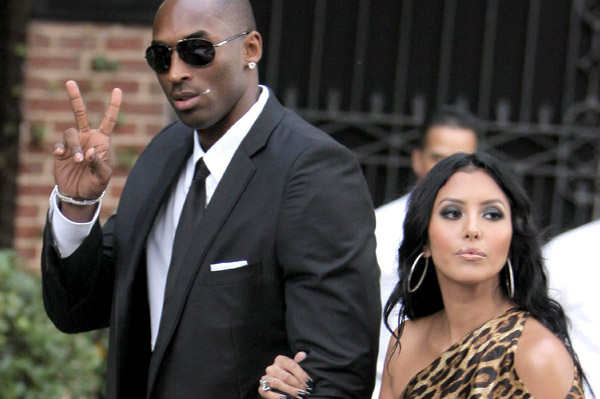 It sounds like cupid was busy reuniting estranged couples during Valentine’s Day. His biggest coup? Los Angeles Lakers star Kobe Bryant. The baller was spotted kissing his estranged wife, Vanessa Bryant, after he played the Atlanta Hawks on V-Day, according to US Weekly.

The pair snuck in a smooch in the tunnel back to the locker room after the Lakers won the game, adding to the speculation that the duo is ditching the divorce. Kobe was reportedly “depressed” after Vanessa filed for divorce in early December. However, the split is still on: The reported $75 million divorce settlement between the two is already hashed out, giving her their homes in Newport Beach, California and a boatload of cash.

Vanessa, 29, stuck by Kobe after his highly publicized rape case in 2003. Afterward, he bought her a $4 million purple diamond ring to apologize. However, it was his rumored infidelity that did in the marriage, according to reports.

“Vanessa said Kobe’s cheating was out of control,” a source told the National Enquirer. “She estimated that he was averaging at least 10 affairs a year with different women over the course of their marriage and puts his number of conquests at 105.”

One rumored mistress was Keeping Up with the Kardashians producer Carla DiBello, according to TMZ. The final straw for Vanessa reportedly came after she discovered photos of Kobe with his flings.

“What’s ironic… is that Vanessa still loves Kobe — but she just can’t stand his infidelities anymore,” TMZ wrote in December.

Well, it takes a whole lot more than love to make a good marriage. Here’s hoping they get some serious counseling if they decide to take another turn at their marriage.

Oh, and Vanessa should buy a really short leash, too.

Do you think Vanessa Bryant should take Kobe Bryant back?