Cindy Crawford refuses to let her 10-year-old daughter pose for model shots until she’s older. Is it the right decision? 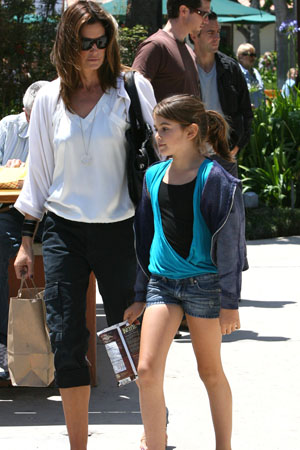 Model scouts discovered Cindy Crawford when she was just a teen, but that doesn’t mean she’s going to let her daughter go down the same path.

“At this point, she’s too young to pursue a career. There aren’t even a handful of jobs for a 10-year-old girl,” Crawford told The Daily during Mercedes-Benz Fashion Week in New York City.

Kaia Gerber, the daughter of the supermodel and her husband, Randy Gerber, already modeled for a Versace children’s campaign. The photos created a bunch of buzz, but she’ll have to wait until she’s a bit older to pursue it again.

Crawford’s view is refreshing in a world filled with Toddlers & Tiaras and Dance Moms.

The model and designer’s decision likely comes from a desire to save her daughter some heartache as a teen.

“I just saw the CoverGirl commercial with Taylor Swift and I thought, ‘Wow, it is so hard for models to get a job these days,'” she said in 2011. “You have to sing and act, too. There doesn’t seem to be as much work specifically just for models.”

Instead, she’s more interested in teaching Kaia and her son healthy habits.

“Being a woman and having a daughter, I don’t want her to feel like in order to be attractive or healthy or thin, that you have to deprive yourself all of the time. So if we go out for ice cream, I don’t say, ‘Oh, I can’t have that!’ — I’ll order one. I don’t make a big deal out of it.”

Do you agree with Cindy Crawford’s decision?