Chris Brown reportedly used a ridiculous pick up line on a girl during Grammy Awards weekend. Is he really that stupid? 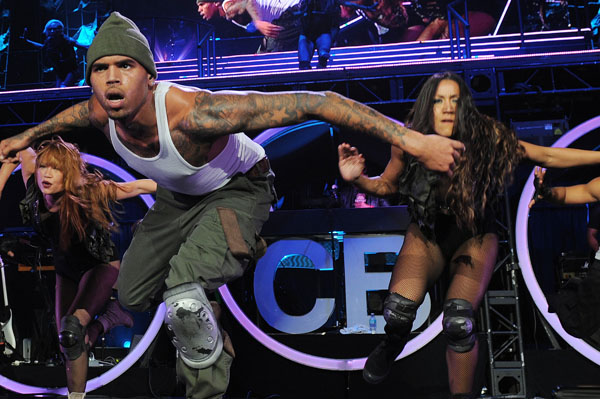 Chris Brown didn’t just offend people during Grammys weekend with a tweet. Nope, the “Look at Me Now” singer reportedly tried to pick up a girl at a Grammys gifting suite with the world’s most ridiculous pick up line.

“Can I get your number? I promise I won’t beat you!” Brown allegedly asked one poor girl at the Lasio Professional Hair Care suite, according to US Weekly.

“He and his friends laughed, then one yelled, ‘That’s his new line!’ Ugh! I wanted to throw up!” she added.

The singer’s publicist questioned the veracity of the woman’s claims. “I’d be surprised if Chris said something that stupid,” he said.

Well, he doesn’t exactly have the best track record when it comes to communicating, but we don’t know if it’s true either.

Still, this story brings up a whole host of questions: Is he still dating Karrueche Tran? Is he still hooking up with Rihanna on the side? We don’t know, but we really hope he doesn’t still take violence against women as a joke.

He’s taken responsibility for his actions in the past.

“My thoughts basically now is just, ‘Ok, How do we get past it?,'” Brown added. “‘How do you, Chris, go from point A to point B? How do you learn from your mistake, turn it into a positive and help other people with this situation and at the end of the day become the person that you want to be?'”

Oh, Chris, you know violence isn’t something to joke about. Let’s grow up already, okay?