Charlie Sheen and Warner Bros. are at each other’s throats again. What started it this time? One little photo. 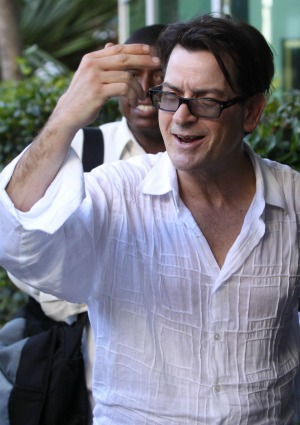 The brief days of Charlie Sheen being graciously complimentary towards Two and a Half Men are over. The actor and Warner Bros. are at each other’s throats again, all over an old photo.

The production company — who owns Two and a Half Men — is up in arms because they claim Sheen used old promotional photos from the show to sell his new sitcom Anger Management at a recent television convention. One image in particular showed the actor wearing one of his character’s trademark retro bowling shirts sitting atop a motorcycle.

Warner Bros. holds the copyright to the images and are so upset that they had their legal department fire off a cease and desist letter — a move Sheen finds hilarious.

“I’m thrilled,” Sheen told TMZ. “It insulates me from having to redundantly see myself in the idiotic bowling shirt.”

“Perhaps if Warner Bros. spent as much time and energy focusing on their show, it wouldn’t be such a steaming pile of a**.”

Sheen’s derogatory comments about the new Two and a Half Men starring Ashton Kutcher are a far cry from his attempts at extending an olive branch back at the Emmys in September, when he called the show “great television.”

Anger Management has officially been picked up by FX. The show is scheduled to begin airing in the summer of 2012.

Charlie Sheen and Denise Richards like “brother and sister”

Charlie Sheen is having “two and a half times” more fun

5 mins ago
by Louisa Ballhaus