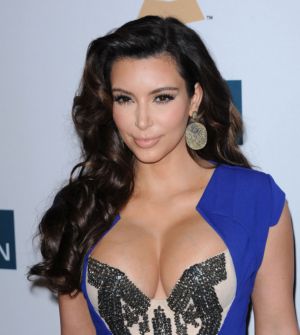 Despite what you may have heard, Kim can, in fact, act her way out of a paper bag.

The famous-for-being-famous bombshell counts Elizabeth Taylor among her idols and Tyler believes naysayers shouldn’t be so quick to count Kim out of the running for similar screen stardom.

Mere days after Kardashian announced that she was putting the kibosh on her Blink-and-You-Missed-It marriage to NBA baller Kris Humphries, Perry controversially handpicked the wannabe starlet for a supporting role in his upcoming dramedy The Marriage Counselor.

Kim, whose acting credits include the true-to-name Disaster Movie and a forthcoming episode of Lifetime’s Drop Dead Diva, will play the best friend of an adulterous relationship expert in the movie.

Tyler says Kardashian critics may be surprised at how much the lens loves Kim.

“I think once people see the job that she did, they’ll know that’s very much possible,” Perry told E! News Gossip Guy Marc Malkin when asked about the likelihood of Kim making a splash in the acting world.

Kim even hired an acting coach to help her prepare for the role, Tyler noted.

Kim Kardashian could wind up on the kutting room floor >>

“Kim did a great job. I think people are going to be pleasantly surprised. I think that all of the heartache that I went through with the fans, I think they’re going to understand once they see it,” added the director, noted for his plays and films comprised of largely African-American casts.

Dozens of fans flooded Perry’s website with their outrage in the weeks after Kim landed the bit part. Tyler later penned an open letter defending his decision to cast Kardashian and hitting back at the criticism.

We hear kid sis Khloe Kardashian is also nursing a bite from the acting bug — just in case one Kardashian sister on the silver screen isn’t enough. The happily-married reality star, who recently debuted her own talk radio show, is reportedly working to book an audition for a scripted guest role on a TV sitcom or drama.