Taylor Swift’s squeaky-clean image is no accident. One moment spent imagining the future is all it takes to keep this singer from turning to sexually provocative stunts like many of her pop star peers. 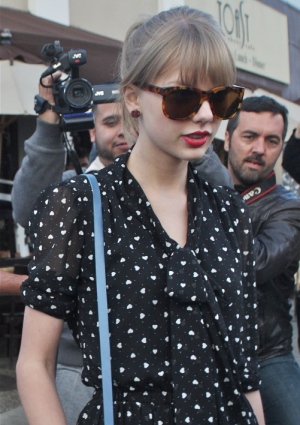 Taylor Swift is legally an adult, but rather than announcing her coming-of-age with skimpy clothes and suggestive dance moves she’s carrying on with her conservative style. The “Safe and Sound” singer recently chatted with The Today Show about her conscious image choices.

When asked what it’s like to now be writing songs as a woman, rather than the tales of teen heartache that made her famous, Taylor Swift replied, “Hopefully it becomes a natural evolution of songwriting.”

Bringing images of Britney Spears, Christina Aguilera and Miley Cyrus’ sexual forwardness to mind Swift continued, “I’m never gonna have the moment where I’m like, ‘I’m a woman now, guys. I’m only gonna write dark songs and I’m gonna dance in my bra all the time.’ That’s not really me.”

“I hope things will gradually evolve into growing up as people naturally grow up. I find that 22 is an age where a lot of times artists feel like they need to be like, ‘I’m a woman now, guys.’ But I don’t know, I feel like it should happen naturally for me.”

“I think that the way you live your life has to kind of come from a place of what you want your kids and your grandkids to look back on your life and read about you or think about you and the story you want to tell,” Swift, who recently performed at the Grammys, went on to say of her public persona. “I think that has to come from a place of, ‘This is the person that I want to be.’ But on a bigger scale, in my life, who I choose to be as a person in this life really does affect other people.”

Check out Taylor Swift chatting about her role in The Lorax and her real-life image here: