This week, Modern Family tackles a taboo topic — inbreeding. Mitchell and Cam have baby fever and in a night of drunken bliss Claire agrees to give them the gift of life. Cue the creepy Deliverance music. 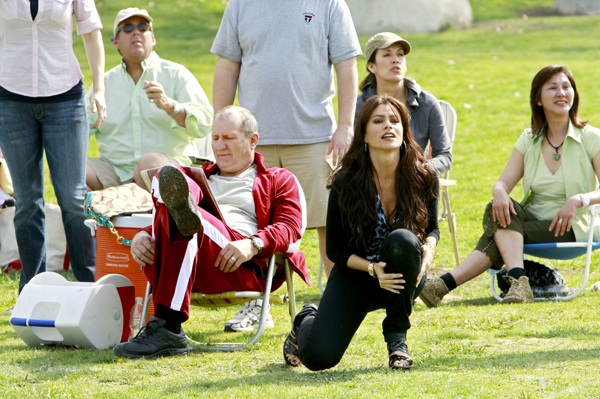 What’s their secret? They used a surrogate, which according to Cam is “all they talk about.” And by the end of this episode, it’s all anyone will be talking about.

When Manny (Rico Rodriguez) is invited to play football with some neighborhood kids, Jay (Ed O’Neill) is ecstatic. He sees it as an opportunity for him to do something normal. Since Manny’s not around, Jay accepts the invitation on his behalf. He also cancels Gloria (Sofia Vergara) and Manny’s trip to the theater, making him free for the game.

Thanks to Mitchell and Cam, Phil (Ty Burrell) gains Steven and Stefan as new clients. With a baby in tow, the couple’s looking for a bigger home. But they’re what some realtors might call: “Commission: Impossible.”

Steven loves the house but doesn’t love the house, while Stefan absolutely loves it, but isn’t in love with it. Luckily for Phil, the duo overhears a phone conversation between him and Claire and assume he’s courting another couple. Once Phil mentions the names Luke (Nolan Gould) and Leon (Joseph Bonilla), the pair decides to buy the house immediately.

Mitchell and Cam love the kids

Steven visits Cam and Mitchell and encourages them to use a surrogate. Cam’s apprehensive and reveals he and Mitchell can’t decide who’ll “ice the cupcake.” Therefore, Steven suggests the swirl method. It’s when they take both men’s donations, mix them up and fertilize the egg so you don’t know who the father is. 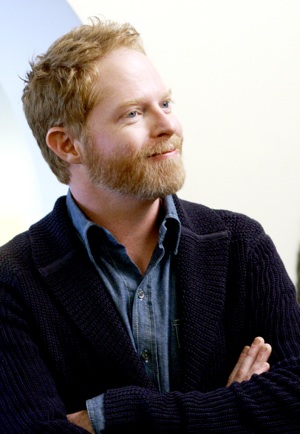 Mitchell and Cam almost buy into the idea until Stefan walks in with him and Steven’s son. Their child’s paternity is clear. In the words of Maury Povich, “Steven, you are not the father!”

Later on, Manny participates in the neighborhood football game, but is injured after getting distracted by a penny. Over the years, he and Gloria have collected random pennies in hopes of finding 100.

After the accident, Manny’s confined to a motorized wheelchair. Gloria’s furious and confronts Jay about his manipulation. Their argument is intense but who can take it seriously with Manny bumping into furniture in the background?

Phil, Claire (Julie Bowen), Mitchell and Cam go out to dinner to celebrate Phil’s latest sale. He thanks Cam and Mitchell for introducing him to Steven and Stefan, and mentions their adorable son. Cam quickly takes a sip of wine and claims it’s part of his new drinking game. “It’s called every time I’m depressed I take a drink.” Mitchell replies, “That game exists. It’s called alcoholism.”

Drinks start flowing, and before you know it, they’re laughing, crying, completing each other’s sentences and agreeing to make babies! The next morning, a raccoon-eyed Claire and bed-head Phil are mortified by their reproductive offer. Cam’s excited to use Claire’s egg, while Mitchell’s hungover and creeped out. He asks, “What are we supposed to tell the baby? Say hi to your Aunt Mommy?”

Too close for comfort

The quad gathers at Jay and Gloria’s and have an awkward reunion. They greet each other but quickly move to separate corners. Haley (Sarah Hyland), Alex (Ariel Winter) and Luke overhear their parents discussing the yet-to-be-conceived baby and get excited. Meanwhile, Cam decides to share the news with Jay, who calls it “unnatural.”

Gloria sees Jay’s reaction as another example of him dictating his kid’s lives. She agrees that a brother and sister making a baby is “a freak show. But it’s their freak show!” Before you know it, the whole family’s arguing about inbreeding.

Claire and Mitchell retreat under the table and decide to come clean. They love each other but not enough to have a nephew-son together. It’s a sweet moment that’s interrupted by Jay who catches the siblings in an embrace. “So this is really happening?” he asks.

In the end, Mitchell and Cam realize they don’t need a surrogate. They notice Lily (Aubrey Anderson-Emmons) in her room, dressed like a Flamenco dancer, organizing her toys. Cameron declares, “We didn’t make her but she sure is us.”

Back at Jay’s, Manny is walking again and excited about his 100th penny. Jay finally sees how important the penny tradition is to him and Gloria. When they’re not looking, he steals some coins and claims they miscalculated. Now they have to look for more — together.

What did you think of last night’s episode of Modern Family?