Music fans might recognize an upcoming contestant of Dancing With the Stars, if Ryan Tedder is telling the truth. Will this help or hurt Gavin DeGraw’s career? 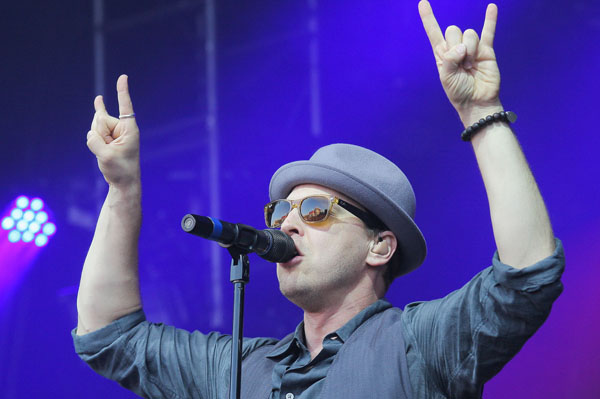 Former presidential candidate Herman Cain might be a no-go for Dancing With the Stars, but who else is in talks to join the popular ABC reality show? Producers won’t say much, but that hasn’t stopped people from speculating ahead of the planned Feb. 28 announcement.

One frontrunner mentioned for the show is “Not Over You” singer Gavin DeGraw. Say what? We were confused too, but it’s true, says OneRepublic front man Ryan Tedder.

“Gavin DeGraw is doing Dancing With the Stars, I heard,” the “Apologize” singer told reporters at the Grammys on Sunday night. We don’t think he’s joking — after all, it’s a pretty random thing to joke about at an awards show.

“He’s amazing. He’s one of my favorite male singers alive,” Tedder added of his pal.

We can get into this addition, if at least to see whether or not DeGraw can dance as well as he sings. We’re thinking the answer to that one is no, based entirely on the fact that he’s a white singer/songwriter. Yeah, it’s a stereotype, so we’re hoping that he proves us wrong.

There’s still one big question: Will any of the other ousted GOP presidential candidates make it on the show? It’s not likely, especially since Minnesota Rep. Michele Bachmann said she’s not putting on her dancing shoes anytime soon.

“In full disclosure, I did win a polka dancing competition when I was in the tenth grade at my alma mater, Anoka High School in Anoka, Minnesota,” Bachmann said in a statement. “But, despite my tenth grade polka success and my lifelong love of ballroom dancing, the recent rumors are false. I will not be joining Dancing With the Stars.”

Who do you think will join Dancing With the Stars this season?

Read on for more Gavin DeGraw