The train wreck we’ve come to know and love as the American Idol group round finally got underway Wednesday. Who fell flat and who rose to the occasion? Read on to find out. 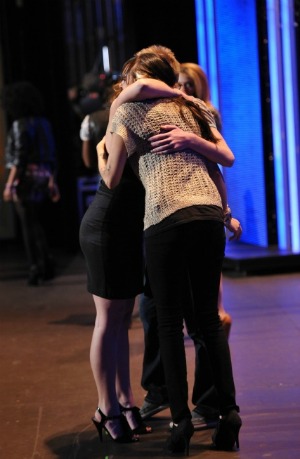 The group round can make or break you on American Idol — we prefer the “break” part, it’s more fun to watch — and there was plenty of it this week.

Not only did the contestants have to go through the brutal group round, those who made it through then had to perform with the American Idol band to prove they deserve a spot on season 11.

We have to start off with Imani Handy. If there was a fainting competition going down, this girl would win — hands down.

She blew last week’s fainter, Symone Black, out of the water.

Handy was determined to get on the stage and perform with her group.

She was the only one nailing it, then bam! Down she went!

Best part? Her group kept singing! Oh, it gets better. The judges then critiqued the rest of the group — and sent her home!

The group round — lyric amnesia

Before we get to the illness we’re calling lyric amnesia, let’s talk about a few stars who sailed through to the final day with a hot, hot performance — Aaron Marcellus, Creighton Fraker, Jennifer Hirsh and Reed Grimm.

We’ve been talking about these four for weeks and the run they did at the end of their performance got the entire team a nod to the next round.

Nigel Lythgoe on The Voice >>

More people fainted, more people cried and more people forgot the words to their songs. It was like watching an episode of Don’t Forget The Lyrics.

Going solo with the band

Those that made it through the group round and got the chance to perform with the Idol band, made up for the awful, ear-hurting part we had to sit through earlier.

Colton Dixon, Phillip Phillips, Jen Hirsh and Shannon Magrane made our ears do a happy dance, that’s for sure.

So, who made it past Hollywood week?

The remaining contestants will now go on to Vegas in hopes of keeping the dream alive.

Did you catch American Idol? Head over to our comments section and sound off!

Vocal disaster or not so bad?