We’re not sure if we should be relieved or bummed over this latest Dancing with the Stars news: Herman Cain will not be tapping his toes on the ballroom floor come March. 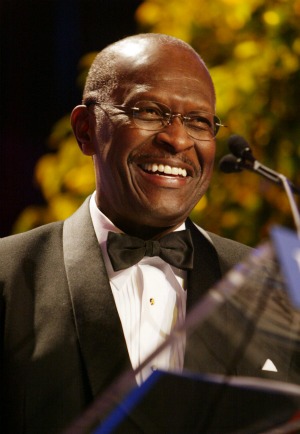 Names are being thrown around everywhere as Dancing with the Stars inches closer to announcing its season 14 cast on Feb. 28.

The one-time GOP presidential contender is saying no to the ABC show.

According to The Wrap, Herman Cain’s executive assistant, Lisa Reichert, revealed to the Atlantic Journal-Constitution that Cain was approached by the world’s most famous reality dancing show, but it’s not going to happen.

Reichert explained, “He can’t dance in an eight-count. He can only dance in a nine-count.”

Herman Cain became a staple for comedians everywhere once word got around that women were coming forward with allegations of sexual harassment.

The allegations of sexual misconduct eventually led to the decision that he would drop his run for president.

Cain isn’t the only name being whispered about. Tim Tebow has denied he’s heading to the show and Dolly Parton told The Boot she continues to say no to the show. Gavin DeGraw is also said to be joining season 14.

You can see who will make the cut when the cast is announced Feb. 28. Season 14 premieres on March 19.

Would you have liked to see Herman Cain on DWTS? Head over to our comments section and sound off!

Who do you want to see on Dancing with the Stars‘?