People are always speculating if Jennifer Aniston is pregnant, but she has yet to pop out a baby! The former Friends star who headlines the upcoming film Wanderlust is clearing the air about the constant pregnancy rumors by showing off her sculpted abs in the latest issue of GQ. 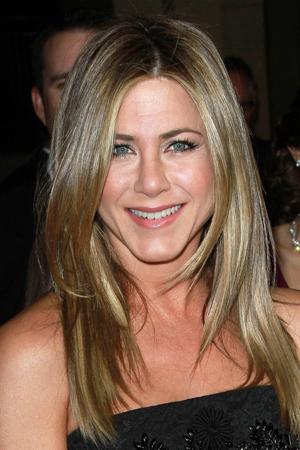 Will the rumors ever end? While Jennifer Aniston is simply trying to promote her new movie Wanderlust — the feel-good romantic comedy that also stars Paul Rudd and Aniston’s beau Justin Theroux — she often finds herself overloaded with questions that speculate a possibly pregnancy rather than actually find out more about her upcoming film.

“I’m not having triplets. Not having twins. Nor am I having one baby,” she clarifies in the latest issue of GQ. “I did not elope.”

Aniston met Theroux while filming Wanderlust, and though she recently bought a new home in Bel Air and has been spotted with a “pre-engagement” ring, their relationship isn’t headed for the altar or the baby nursery just yet. “We got a dog,” she responds to questions about their relationship.

So why are the rumors resurfacing yet again? “Well, I recently quit smoking, and you do put on some extra pounds,” she explains, even though she flashes her set of sculpted abs in the issue. “It makes a difference, especially if you’re not 20.”

“I think people maybe want me to have a kid now,” she guesses. “I still kind of go with, if it happens, it happens. I’m calm and peaceful with whatever the plan is. It’s not something where I’m going, ‘I gotta have a kid!'”

Aniston doesn’t think she’s missing out on anything though, since having kids isn’t how she defines happiness. “I think that’s sort of cliché, isn’t it? Like, if you want to be happy, you should have the house, the husband, the kids… Kids are messy!”

But what will happen once she’s actually pregnant? “The one time I do say, ‘Yes! I’m pregnant!’ [the tabloids will] be like, ‘Pfft. Right.'” (Paul Rudd jokingly crowns her as “the girl who cried ‘twins!”)

Nevertheless, she sets the record straight: “You heard it here. I’m not knocked up now.”