Have we learned nothing from Jaws? Sometimes it’s best to stay out of the water. In Halle Berry’s latest film Dark Tide, she finds herself up against a familiar foe — the Great White shark. It’s back and it’s hungrier than ever! 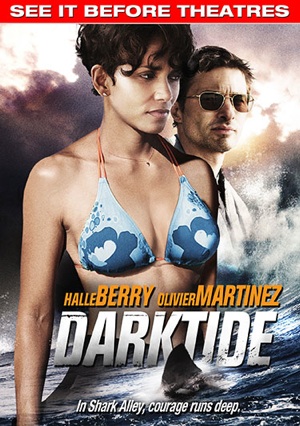 Oscar-winner Halle Berry returns to the big and small screen with her new film, Dark Tide. The actress headlines the movie that pits humans against the deadliest creatures of the sea.

Dark Tide follows Kate, a shark expert whose business is on the decline. Ever since a fellow diver was killed under her command, no one trusts her in the water.

The event left Kate traumatized and unable to return to the sea. Now, the once famous “shark whisperer” has excessive debt, a soon-to-be-foreclosed home and receives countless threats from the bank.

In desperate need of cash, Kate takes on a millionaire thrill-seeker who’s interested in a shark dive — outside the cage. Despite her reservations, she still takes him to Shark Alley, the world’s most dangerous feeding ground.

The last film Berry appeared in was 2011’s New Year’s Eve. She was one part of a huge ensemble, whereas with Dark Tide, she carries the whole film. Can you say pressure?

Lionsgate has announced that Dark Tide will debut on Ultra VOD (Video-on-Demand) on March 8. That’s three weeks before its theatrical release on March 30.

Are you excited about Berry’s latest film? Will you be watching Dark Tide?