Bobbi Kristina Brown is slowly adjusting to life without her mother, Whitney Houston. Find out what her father, Bobby Brown, is saying about her state of mind. 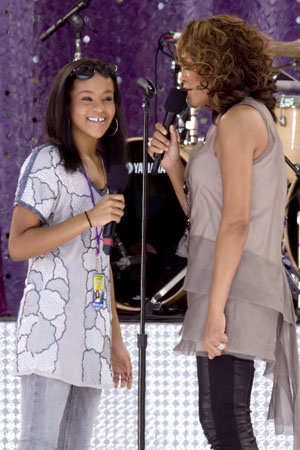 Our hearts broke for Whitney Houston’s daughter, Bobbi Kristina Brown, when word of her mother’s death emerged Saturday night. The 18-year-old aspiring singer was devastated by Houston’s death at the Beverly Hills Hilton, leading her to multiple hospitalizations according to sources.

“She was distraught, on the verge of a complete breakdown,” a source told RadarOnline. “Not knowing what to do, members of her mother’s entourage tried to calm her down with a sedative. The two were an unfortunate mix and she ended up passing out.”

Her fragile state of mind further deteriorated after police refused to let her see her mother inside her hotel suite. Bobbie Kristina reportedly “screamed, cursed and demanded to see her mother” before leaving, according to Radar.

Now? Bobbi Kristina is “doing much better,” according to her father.

“We continue to provide love and support to Bobbi Kristina,” Bobby Brown said in a statement Wednesday morning. “She is dealing with the tragedy of her mother’s death and would prefer to do it outside of the public eye. I ask again that our privacy be respected.”

Friends of Houston said her family’s anger toward Bobby is misplaced, adding that she started her dangerous addiction to drugs before he came into the picture in the early ’90s.

“It was Whitney herself. I think even she has admitted that,” friend Jennifer Holliday said. “And Bobby never forced her to do anything. These were her choices.”

Here’s hoping they can put their differences aside to help Bobbi Kristina mourn her mother. “However we will get through this tragedy as a family,” Bobby told People earlier this week.