What sad connection does Whitney Houston have to another late singer? You might be surprised. 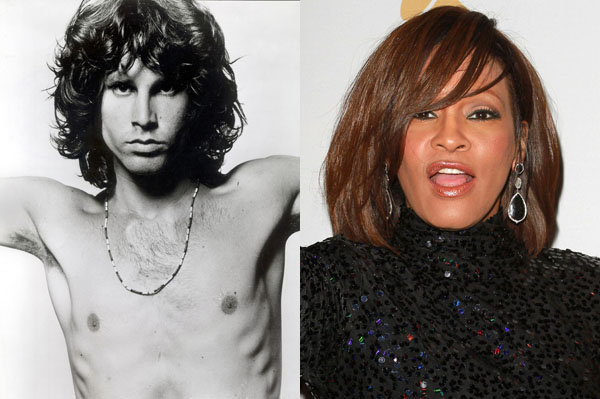 The world is still mourning the sad death of Whitney Houston on Feb. 11. The “I Will Always Love You” singer was reportedly found in the bathtub in her Beverly Hills Hilton room before Clive Davis’ pre-Grammy party.

However, police believe she died from an overdose of prescription medication, not drowning.

“We’re told Coroner’s officials informed the family there was not enough water in Whitney’s lungs to lead to the conclusion that she drowned. Our sources say the family was told Whitney may well have died before her head became submerged,” TMZ reported earlier this week.

We’ve all heard stories about celebrities overdosing in their sleep — like Heath Ledger in 2008 — or outside a club, like River Phoenix. However, we thought Houston’s death mid-bath was something new.

Jim Morrison, Hole guitarist Kristen Pfaff and former Pretenders bassist Pete Farndon were all found dead in their bathtubs of suspected overdoses. What gives? Writer (and confessed drug addict) Cat Marnell sums it up in her post on XOjane.com.

“So while stars are infamous for their hard partying, their dizzying downward spirals, their headline-making binges, but the truth is, when they use most heavily and subsequently die, it’s usually in their most private places, where they can relax, be in quiet, and don’t have to appear functional to the outside world,” she wrote.

“Also, baths feel good on drugs, and also, like anyone who’s f**ked up all the time, I was too shaky to stand,” she added.

Can deaths like Houston‘s be prevented? It’s hard to say. We do know one thing: Overdoses — including celebrity ones — are awful and life-altering no matter if they happen in the bathtub or in public.