What happened to Cougar Town? The cul-de-sac crew returned Tuesday night to little fanfare. The comedy hit an all-time low in ratings, which begs the question — where was everybody? Valentine’s Day strikes again! 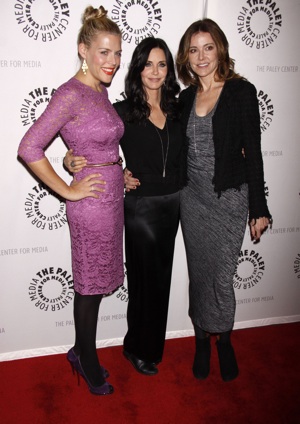 During its extended hiatus, Cougar Town creator Bill Lawrence tried his best to keep the show afloat. He set up fan screenings, and sponsored a Cougar Town party at the winter TCAs.

Unfortunately, the numbers are in, and Cougar Town‘s ratings are at an all-time low. According to Entertainment Weekly, the latest episode drew “4.8 million viewers and a 1.8 adults 18-49 rating.” That’s down 47 percent from its second season premiere.

To be fair, it’s not the show’s fault. It has the same great cast and writing but there are other elements at work. Cougar Town is on a new night, with an earlier time, and a different lead-in.

Last season, it had the advantage of Modern Family as a lead-in compared to this year’s Last Man Standing. Also, its new time slot has been plagued with bad ratings and cancellations. Previously, both Work It and Man Up held the spot but were axed shortly after their debuts.

Oddly enough, when Bill Lawrence spoke to EW earlier this week, he predicted an underwhelming return.

“Here’s what I really think will happen: I think the show will not premiere as high as people hope,” said Lawrence. “And what I hope will happen is what always happened on Scrubs when they brought it back. The first week, the numbers are always lower than their predecessor… But what would happen then, as people became educated that the show was back on, each week it would be higher. The next week, the gap would be closed.”

Well, you heard him. Let’s help Cougar Town gets its mojo back!