Filmgoers haven’t seen the last of Optimus Prime. Director Michael Bay has been tapped to step behind the camera on a fourth Transformers flick. Transformers 4 is set for release in June 2014. 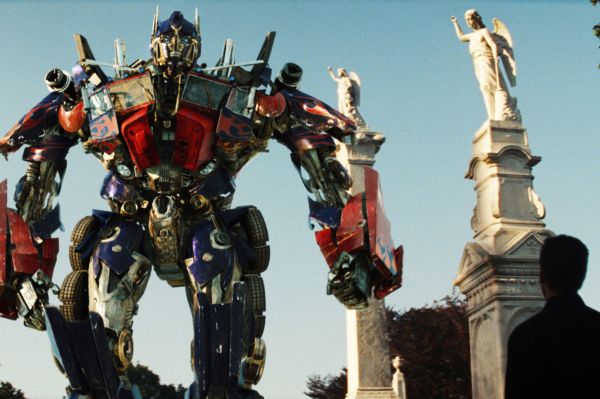 Paramount Pictures has signed lensman Michael Bay to a two-picture deal that includes the next installment of the Transformers franchise, the studio announced on Monday.

Producer Lorenzo di Bonaventura has confirmed that Bay is definitely on board to direct the fourquel, which will likely begin production sometime next year.

“Michael’s going to direct and it’ll be in the summer of 2014. We’ll be releasing then.”

By calling Transformers 4 a reboot, di Bonaventura opened up speculation that it’ll be something along the lines of the upcoming The Amazing Spider-Man, in theaters July 3. A prequel to the blockbuster Paramount series that starred Tobey Maguire is set to star Andrew Garfield as web-slinging shutterbug Peter Parker.

“Again, it’s a hybrid because it’s a funny thing. I’m not involved with Spider-Man, but what I perceive Spider-Man to be is just a redoing of the whole thing. It’s not. It’s an evolution. There’s still continuity that’s going on, yet there will be a lot of new cast,” di Bonaventura said.

“Whether there’s anybody from the first cast, we don’t even know yet. The truth is it’s going to be a whole new story. The characters that would certainly come along are Optimus and Bumblebee, I’m sure.”

The robots are back, but the futures of Transformers stars Shia LaBeouf, Tyrese Gibson, Josh Duhamel and newcomer Rosie Huntington-Whiteley are still in doubt. And after her very public firing , fans probably shouldn’t hold their breath for more Megan.

In a June 2011 interview with MTV News, LaBeouf announced that the third Transformers film, Dark of the Moon, would be his last.

“I’m not coming back to do another one. I don’t think [director Michael Bay] will either. It’s still a hot property, I think, especially coming out of the third one. So I imagine they’ll reboot it at some point with someone else.”

Transformers 4 will premiere on the silver screen on June 29, 2014.

Excited about Transformers 4? Would the movie be the same without the original main cast?