The X Factor‘s Stacy Francis has broken her silence about the night that she nearly brawled with an “out of control” Whitney Houston, The 42-year-old vocalist says she was on a date and paying homage to singer Etta James when “cougar” Whitney falsely accused her of getting flirty with her boy toy, singer/reality star Ray J. 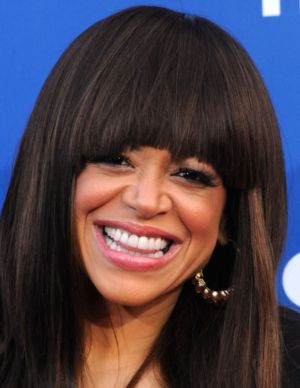 The departed “I’m Every Woman” hit-maker, 48, reportedly “went crazy” and “lashed out” at a talent show singer days before she died. Houston is said to have been “out of control” as she shouted at one-time X Factor finalist Stacy Francis during a pre-Grammy party on Thursday night.

The singing legend apparently went ballistic after she mistook friendly banter between Francis and her on-again/off-again boyfriend, Ray J, for flirting. Stacy says she was on a date at the Tru Hollywood nightclub in Tinseltown when the drama kicked into high gear.

Both Stacy and Whitney had performed at a tribute concert to Etta James, who lost her battle against leukemia in January. Everything seemed to be going well. The ladies even chatted a bit.

But, according to Stacy, Whitney’s demeanor changed drastically when the crooning Ray J, 31, entered the VIP area. Francis, a favorite on the first season of the Fox talent show, quickly found herself on the receiving end of the aging diva’s wrath.

“Ray had come over to me when he got there and he hugged me and said congratulations on The X Factor. But I don’t think Whitney understood. I was with a date. She said, ‘Why are you here? Who’s the b***h?’ It was really weird because we’d been talking for hours,” Francis, 42, told Britain’s Daily Mirror newspaper Tuesday.

“She was out of control. She put her hand in my face. She was screaming at me and called me a b***h. She just went crazy — like Jekyll and Hyde,” Francis continued. “I turned to look at her and she pushed my forehead and turned my face away. I grabbed her hand and said, ‘Please don’t do this. You’re everything to me. You’re my idol, you’re a legend.'”

Whitney — a repeat rehabber with a storied history with drugs and alcohol — was reportedly under the influence of tequila and champagne at the time of the incident.

Word ’round the rumor mill has it that Ray J had rekindled his romance with Houston in recent weeks. The 31-year-old tried to calm the angry singer down by assuring her that he and Francis are just old friends.

“There was a lot of alcohol there. She was doing shots. I saw her drink one before she went on stage to sing and then she had another one when she came off… Ray and his friend Jo Jo were trying to grab her and so were the security guards because it had got out of hand,” Francis added.

Spywitnesses on the scene back up Stacy’s version of events.

“She ran over to them and began screaming, ‘This is my man! I’m a cougar!'” one squeal told Radar Online after the altercation.

In a chat with Extra TV the day after the argument at Tru Hollywood, Ray J — who moonlights as a VH1 reality personality — denied that he was dating Whitney.

Two days after the altercation, Houston’s lifeless remains were found in a tub full of water at the Beverly Hilton Hotel.

Stacy said she was heartbroken to learn of Whitney’s death. She now regrets that what should have been a once-in-a-lifetime meeting with an icon almost left her in stitches — literally.

“I loved Whitney Houston with all my heart. She was such an amazing musical influence for me. I deeply regret the events that led to Thursday’s misunderstanding, but I respect and love her more than I can say.”