Here’s something that doesn’t happen often: Oprah is in trouble for tweeting. The Queen of Talk frazzled Nielsen chiefs after posting a Grammys night Twitter plea soliciting viewers for her ratings-strapped monogrammed network.

Chrissy Teigen & Elizabeth Banks Love Pork Rinds So Much, They Want to Put Them In Their Cookies 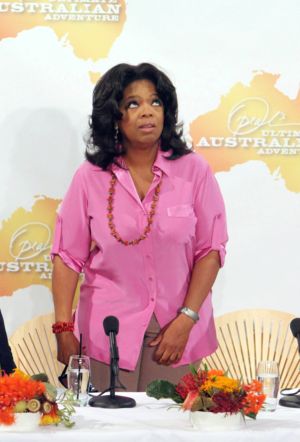 It isn’t every day that the Queen of Talk has to issue a public apology.

Oprah Winfrey has been busted for using Twitter in an attempt to boost ratings for her struggling cable network. The media mogul found herself embroiled in a furor after she took to the microblogging site with a tweet urging her fans — especially Nielsen households — to tune into the Oprah Winfrey Network (OWN) instead of the 2012 Grammy Awards.

“Everyone who can please turn to OWN, especially if you have a Nielsen box,” Oprah penned in a plea to her more than nine million followers just before the start of Oprah’s Next Chapter.

You know what they say about desperate times.

Nielsen is the company in charge of charting American television ratings. Nielsen measures viewership by taking a sample of about 25,000 households across the country.

“It is Nielsen’s policy to note attempts to single out panel members to either change their viewing habits or otherwise influence or affect their reporting,” according to Matt Anchin, spokesguy for Nielsen.

Apparently, that’s a memo someone over at Harpo forgot to shoot to O.

Some of Oprah’s followers appreciated the reminder. But the response to the tweet was overwhelmingly negative.

Members of the Twitterverse criticized the Emmy winner for “begging for viewers” and being “desperate.” Oh — “unethical” was another adjective tossed around.

A defiant Winfrey defended herself.

“The word ‘please’ is used as courtesy not a beg,” the journalist wrote.

“‘Desperate’ not ever a part of my vocab… ‘unethical’ a little harsh don’t u think? Seemed like it made sense to me. Sorry if u’re offended.”

OWN owns! Oprah’s Next Chapter off to big start >>

“I removed the tweet at the request of Nielsen,” Oprah said in a statement Monday. “I intended no harm and apologize for the reference.”

The ratings for Winfrey’s monogrammed network peaked at around 153,000 daily viewers when it replaced the Discovery Health channel in January 2011. By October, the daily numbers had slid down to around 121,000.

In December, Oprah confessed that OWN hasn’t exactly lived up to the hype. It’s a fact that the interviewing icon is committed to changing: Oprah plans to crank out 70 hours of Oprah’s Next Chapter this year.

“I would absolutely say it is and was not where I want it to be for year one,” she said. “I am a determined and committed woman. I don’t give up. I’m just getting started.”

The 54th annual gong-giving was the most-watched since 1984, when Thriller icon Michael Jackson won a record-setting eight awards.

3 hrs ago
by Jessica Castillo

5 hrs ago
by Jessica Castillo