Chris Brown continues to play the victim card after a lukewarm reception at the 2012 Grammys. Find out what he’s writing on Twitter now. 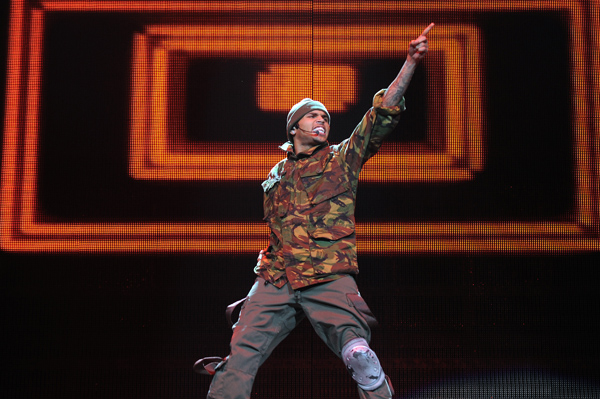 Think Chris Brown has matured in the three years since he was arrested for beating Rihanna? Think again. The 2012 Grammy winner and performer took to Twitter to throw an immature insult at the celebrities and music fans that questioned the decision to put him on the show.

“HATE ALL U WANT BECUZ I GOT A GRAMMY Now! That’s the ultimate F**K OFF!” he tweeted before deleting it a few minutes later and adding a few softer words.

“IM BACK SO WATCH MY BaCK as I walk away from all this negativity #teambreezygrammy.”

Celebrities like Miranda Lambert questioned his spot on the show before the telecast.

“Chris Brown twice? I don’t get it. He beat on a girl,” Lambert wrote on Twitter. “Not cool that we act like that didn’t happen. He needs to listen to ‘Gunpowder’ and lead and be put back in his place. Not at the Grammys.”

However, it’s obvious that Breezy sees himself as the victim, rather than the problem. And why wouldn’t he? Especially since fans took to Twitter to express their desire for a beating from the singer.

“Chris Brown could beat me all he wants. He is flawless,” another wrote.

Will the “Look at Me Now” singer ever grow up? Not likely — he’s the king of Twitter rants.

“Don’t say s**t to anybody and everyone feels its cool to attack me. GROWN ADULTS!!!! That s**t happened three years ago,” he tweeted in November 2011. “TWITTER GETS WACK REAL FAST! I LOVE ALL THE POEPLE WHO SUPPORT MY MUSIC! i never said i was a LEGEND. people please grow up,”

Weigh in: Do you support Chris Brown?