Love was in the air on this week’s episode of Glee, “Heart.” Were you feeling the love for the Whitney Houston number? 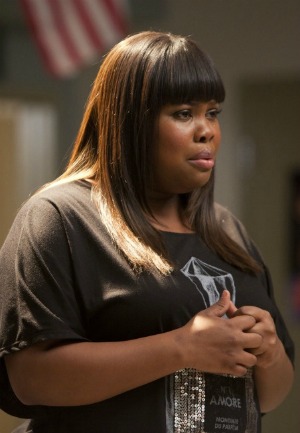 Finding the world’s greatest love songs is not always easy — because there’s so many.

Leave it to Glee to get the job done, while paying tribute to one of the greatest artists — ever!

Glee‘s Valentine’s Day episode, “Heart,” was all about the love, which was the perfect time to honor, remember and respect the late, great Whitney Houston.

So, how did Glee fit the lovely tribute in?

Well, since it was Valentine’s Day, there was a party via Sugar, a few loving couples, one heartbroken couple and two feuding boys.

Mercedes found the courage to tell Shane about her and Sam, but the pain she caused only made her feel disgusted that she cheated.

It led to a beautiful moment of Mercedes (Amber Riley) singing Whitney Houston‘s version of “I Will Always Love You” to Sam.

Normally, we would say the moment was amazingly heartbreaking between Sam and Mercedes, but there was more to the performance than that of two actors. It was an agonizingly gorgeous moment that paid respect to Houston.

We knew it was coming, and it was so simple, yet powerful!

In a fitting end, during the show’s credits the words “We Will Always Love You” appeared against a black screen with white writing.

It’s hard to top that, but there were still other moments to focus on during “Heart.”

Rachel’s two dads made their debut — Hiram (Jeff Goldblum) and LeRoy (Brian Stokes Mitchell). They schemed with Finn’s parents to show the kids what it’s like to live together. They let them stay the night at the Berry’s — together.

Then there was Artie and Rory’s fight for Sugar. Both wanted her, and both pulled out all the stops. In the end, Rory claimed to be heading back to Ireland, which made Sugar feel sorry for him — he’s not going anywhere, people.

Then there was the big reveal of Kurt’s secret admirer — it was Karofsky. He’s been off the map for a while, but Kurt’s gay-bashing bully, who eventually came out himself, confessed his love to Kurt.

Kurt let him down gently, but not before another student saw them.

Did you check out this week’s Glee? What did you think of “Heart?”

Did you think the Whitney classic was fitting?

GLEE – Full Performance of “I Will Always Love You” airing TUE 2/14
Glee’s Amber Riley covers the late Whitney Houston’s “I Will Love You.”