The second episode of musical drama Smash didn’t exactly bring down the house last night. Will it continue to draw a crowd? 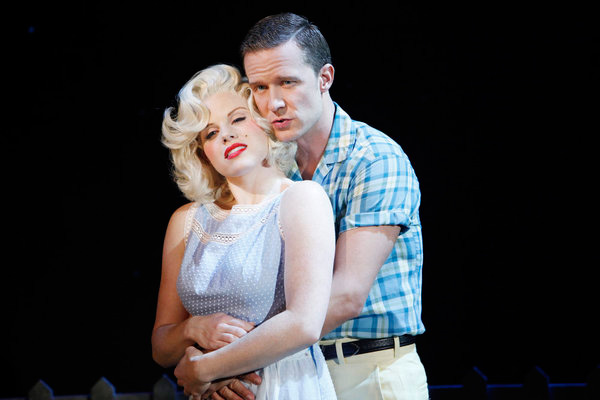 The hour-long drama about Broadway up-and-comers pulled 8.1 million viewers for last night’s episode — dropping more than 30 percent from the 11.5 million who had tuned in for the show’s heavily promoted Super Bowl night debut.

The second installment of the series found starry-eyed Midwesterner Karen (McPhee) squared off against sultry blonde Ivy (Megan Hilty of Broadway’s Wicked) for the role of a lifetime: Marilyn Monroe. And though the pilot showed us that Karen wouldn’t compromise her ethics for any role, this week Ivy proved herself willing to do whatever (or whomever) necessary in an attempt to secure stardom! By episode’s end, the coveted role of Marilyn had been cast, and audiences didn’t have to wait until season’s end to learn the result of the Karen-Ivy Monroe showdown.

Despite Smash’s second week ratings dip, the NBC upstart managed to hold onto the hearts of its key demographic, earning a 2.8 rating to lead the 10 p.m. time slot among viewers under 50. NBC won Monday night overall, thanks to a two-hour episode of The Voice that drew 16.1 million pairs of ears and dominated all key categories.

But despite a big network push and some show-stopping tunes, Smash still finished third in its time slot behind CBS’s Hawaii 5-O and ABC’s Castle — neither of which featured a reimagining of Blondie’s “Call Me.” Did the Westminster Kennel Show, airing opposite Smash and drawing strong numbers for USA, help throw this musical’s ratings to the dogs?

It’s a cutthroat world in this business of show. Time will tell whether Smash (and its plucky heroines) have what it takes!

Smash airs on Monday nights at 10/9c on NBC.