Kate Winslet is freaking out over Titanic 3D. Find out why seeing just 17 minutes of the revamped film had the actress hollering to make it stop. 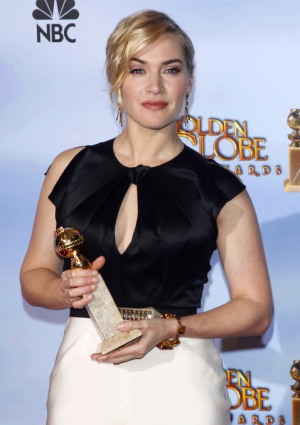 There are two very different sides to Kate Winslet‘s feelings about Titanic 3D. While the actress is happy for those too young for the first release to see the masterpiece on the big screen, she’s also completely freaked out to watch it herself!

“A whole new generation is going to get to experience the film,” Kate Winslet said of taking her children to see Titanic 3D on April 4. “[My children] Mia (11) and Joe (8) still have not seen it. So it is very exciting that I can actually sit with them — together — and we can all watch it together in a movie theater, and that is going to be quite amazing, actually.”

Kate Winslet wants to be a dude >>

Forty-four cities are currently screening the film in a special Valentine’s Day-only release. Kate Winslet has personally only seen 17 minutes of the film thus far and had quite the visceral reaction to watching her young self.

“I was literally like, ‘Oh my God, make it stop! Is that me? Oh my God, that’s me. Block my ears, somebody! Somebody club out my senses. Make it f***ing stop!'”

“And Leo looks so young and so skinny!” Winslet went on to gush of her long ago on-screen love.

“I’m sure I wasn’t really a very good actress,” Kate Winslet confessed to USA Today. “Seriously, we are talking about something that happened 15 years ago. It is a very long time ago. I’ve learned so much, and I’ve changed as a person so much since then. It is really quite weird. Can you imagine anything stranger? It’s going to be like famous all over again, Titanic all over again!”