Kevin Jonas is a mysterious man. The eldest Jonas Brother and his wife Danielle recently attended New York Fashion Week and dished on their Valentine’s Day plans. The singer told SheKnows that he has “lots of stuff” in store for his beautiful bride. 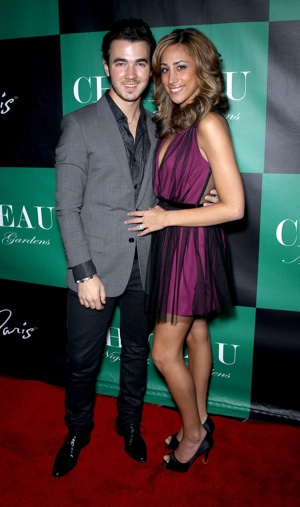 It’s Feb. 14 and love is in the air. But Monday night, Kevin Jonas, (of the world famous Jonas Brothers) was in New York City for Fashion Week.

It was there that he and his lovely wife Danielle, attended an exclusive presentation for the brand, Alice & Olivia.

SheKnows guest correspondent Ashley Hebert caught up with the couple to talk fashion, and what else? Valentine’s Day!

Hebert asked Kevin if he had anything romantic planned for his blushing bride. The singer played coy but revealed,  “Lot’s of stuff. She doesn’t know yet. It’s all a surprise. So I can’t give it away. Nope. Not gonna happen.”

Who says celebrities can’t keep a secret? Whatever is up his sleeve,  we’re sure Danielle’s going to love it!

One thing Kevin wasn’t shy about was his wife’s love of fashion. Alice & Olivia is one of Danielle’s favorite brands, which prompted the pair to attend designer Stacey Bendet’s Fashion Week presentation.

“I’m obsessed with every outfit,” said Danielle. “I can’t pick my favorite yet. I took pictures of everything.”

The Jonas’ weren’t the only stars at the Alice & Olivia event. Gossip Girl‘s Kelly Rutherford was also in attendance, and discussed her V-Day plans with SheKnows. The Bachelor alum Ashley Spivey, reunited with Hebert to dish double dates, and The Real Housewives of New York City‘s Kelly Bensimon opened up about her book, I Can Make You Hot.

New York Fashion Week is still in full swing so stay tuned to SheKnows for the latest in entertainment, gossip and of course, fashion!