Kelly Rutherford is spending Valentine’s Day with the two loves of her life — her kids! The Gossip Girl actress shared her special plans with Ashley Hebert, celebrity guest correspondent for SheKnows, at NYFW. 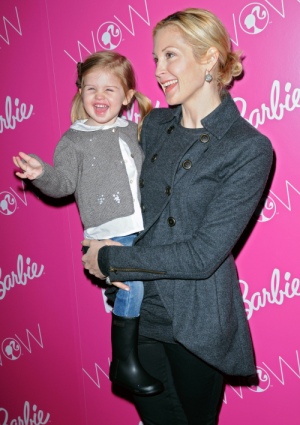 Ashley Hebert took a turn as celebrity guest correspondent for SheKnows Monday at the Alice & Olivia fashion presentation during New York Fashion Week. Actress Kelly Rutherford stopped by to chat about not only the designs, but her Valentine’s Day plans and Gossip Girl co-stars.

“I have a lot of Alice & Olivia,” the 43-year-old actress told Ashley Hebert. “I think it’s incredible. I just walked in and I’m looking around, and I love how [designer Stacey Bendet] mixes everything.”

When asked which of her co-stars has the best style Kelly Rutherford told SheKnows, “They all have really great style, and are very individual. Ed [Westwick] has his own style, and Blake [Lively] has her own style. I’m just amazed at how talented they are — they do music and they’re just cool people.”

As for Valentine’s Day 2012 plans in the Rutherford household there’s going to be a whole lot of family-friendly fun and a dose of sweets to boot! “I’m just going to be with my kids,” Kelly told Ashley. “They’re so much fun. Maybe we’ll make some Valentine’s cookies and cards. They’re really into it.”

Rutherford is pictured here with daughter Helena Grace visiting Barbie — The Dream Closet in New York City on Feb. 11. The Gossip Girl star is also mother to 4-year-old son Hermes from her marriage to Daniel Giersch.

Be sure to check out more of Ashley Hebert’s spin as celebrity guest correspondent for SheKnows to find out what The Real Housewives of New York City‘s Kelly Bensimon will be doing Valentine’s Day evening (hint — she won’t be alone!), as well as what’s new with Kevin Jonas and wife Danielle.