Think Taylor Swift could survive The Hunger Games? Our money’s on Katniss! But Taylor certainly knows her way around a music vid. Have you seen her new promo, “Safe and Sound?” 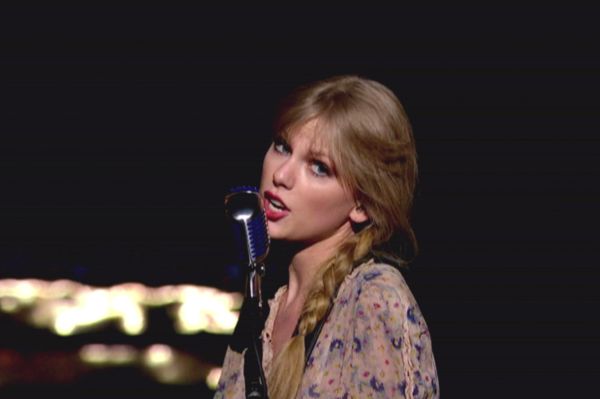 Listen up, Hunger Games fans: Taylor Swift has unveiled the video promo for “Safe and Sound,” her contribution to the soundtrack of the upcoming film.

Swifty collaborated with Grammy-winning The Civil Wars and T Bone Burnett to write and perform the song, which impacted iTunes on Dec. 23. The video debuted on MTV Monday night, featuring The Civil Wars’ Joy Williams and John Paul White.

In news that could leave Taylor fanatics clutching their rosary beads in shock (kinda like Nicki Minaj), the “Safe and Sound” video is full of eerie imagery that’s a far cry from sing-songy promos like “Love Story” and “You Belong with Me” — the latter of which won Swift an MTV Video Music Award in 2009.

Of course, the fact that the video was partially shot in a cemetery probably didn’t help alleviate the morbidity.

“It’s one of my favorite moments in the video; there’s this wide shot, where I’m just kind of crumpled up sitting on a gravestone and it’s actually the gravesite of a couple who lived and died in 1853,” a gleeful Taylor told MTV News this week.

“I’m sitting here thinking, ‘What were their lives like?’ It’s really eerie, considering what the movie is about and how it deals with life and death. It just absolutely blew my mind.”

Taylor Swift is “Safe and Sound” this holiday >>

The “Safe and Sound” release is just the latest fix for Hunger Games junkies. Fans of Suzanne Collins’ smash young adult literary series have been hankering for more dish about the hotly-awaited blockbuster every since the last trailer premiered on Super Bowl Sunday.

The first of the planned four-film franchise takes cinema buffs inside a futuristic America called Panem. Each year in Panem, 24 teenagers are nominated to fight one another to the death in a televised event called The Hunger Games.

The last teen left standing is the victor.

Will The Hunger Games trailer leave you starved for more? >>

Part one of the film/novel epic introduces teenage heroine Katniss Everdeen, played by X-Men: First Class actress Jennifer Lawrence. Katniss volunteers to face-off in the annual deathly competition when her younger sister’s name is selected in a lottery. By taking her sister’s place in the event, Everdeen and her fellow District 12 tribe member Peeta (Josh Hutcherson) must find a way to survive.

The final two Hunger Games novels will be split into two films; similar to what Summit Entertainment did with Stephenie Meyer’s The Twilight Saga: Breaking Dawn.