Why, Martha, that’s a mighty fine-looking dog you’ve got there! A Chow Chow belonging to domestic goddess Martha Stewart won the Best in Breed milk bone at the 2012 Westminster Dog Show on Monday. 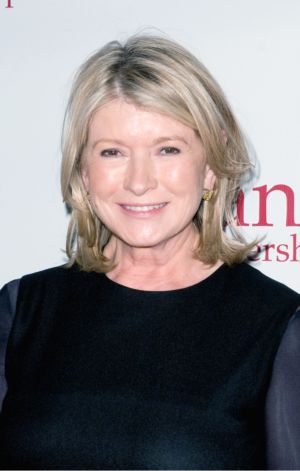 Genghis Khan is the cat’s meow… even though he’s a dog!

Let’s hear a round of “appaws” for Martha Stewart‘s 2-year-old Chow Chow, who won the Best in Breed title at the Westminster Dog Show in Manhattan on Monday.

The wild-haired Genghis edged out competition from three other Chow Chows for the title. He even managed to advance to the non-sporting group competition before being bested by another pooch.

The winning pet is a replacement for Stewart’s late dog of the same name. The original Genghis was one of 17 dogs who perished in a fiery 2009 explosion at Pazzazz Boarding Kennel in Carbon County, Pennsylvania. The blaze, which sent one person to the hospital with severe burns, occurred while the propane tanks at the facility were being refilled.

Canine fans won’t get to see reincarnated Genghis advance to tonight’s Best in Show competition, but Mama Martha’s just as pleased as punch all the same.

Though he’s a big star now, Genghis made time in his busy schedule to trot on over to The Today Show on Tuesday for a little early morning barking with Matt Lauer, Ann Curry and Al Roker.

Martha came along to hold the leash and relish in the praise.

Let’s face it, Stewart could use the good vibes. After being dissed in print by her own daughter, the domestic diva recently learned that her Hallmark Channel gabfest has been iced.

The Martha Stewart Show will stop taping live episodes in the spring, the network said last month. Repeats are expected to disappear from the airwaves by next fall.

Martha Stewart debuted in syndication in 2005. The one-hour, weekday program has aired exclusively on The Hallmark Channel since 2010.

We hear low ratings and high production costs were at the root of the decision to cancel the series.