Kim Kardashian was spied getting mega-flirty with her ex-boyfriend, Reggie Bush, over the weekend. Could a reconciliation be in the works? 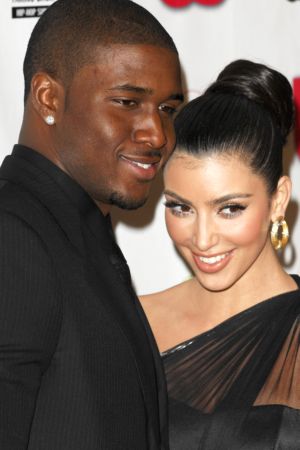 Old habits die hard around Valentine’s Day…particularly when said old habit is a muscle-bound NFL ace with a 1,000-watt smile and abs you could scrub laundry on.

The reality queen has reportedly taken a break from celebrity Bible study (Sidebar: How’s that for a new VH1 docu-soap?) to indulge her sweet tooth.

And it looks like she’s taking a big bite out of her chocolate-coated ex-beau Reggie Bush.

Word on the curb has it that the still-married Kardashian sought out a bit of pre-Valentine’s Day comfort in the Miami Dolphins star, who she first began dating in 2007. As the rest of Tinseltown got wrapped up in the excitement of Grammy weekend, Kim and Reggie sneakily met up for eats at the Beverly Hills Hotel.

It didn’t take long for news of the meeting to hit the blogosphere, fueling speculation that the duo has decided to give their relationship another go, two years after the twosome called time on their high-profile romance.

The pair apparently spent more than an hour enjoying a poolside lunch at the Cabana Club Cafe on Sunday. No surprise, insiders say: Reg and Kim have reportedly been spending “a lot” of time together in the almost four months since the socialite’s whirlwind marriage to hoopster Kris Humphries went belly-up.

But the squeals stop short of calling the get-together getting back together.

“Kim was joined by a female friend and Reggie was with a friend, too,” one snoop gushed to Life & Style magazine on Monday.

“She was wearing a mini dress and platforms with full hair and make-up. Kim sat right next to Reggie and looked really comfortable. She and her girlfriend were laughing [with the guys],” the source added. “It was obvious that they’d all planned to get together and didn’t just run into each other. They were being careful, you could tell. Kim gave Reggie a kiss…”

LeAnn who? Kim Kardashian gets a new bestie >>

Reconciliation rumors have surrounded Kim and Reggie for over a year. Both have flatly denied that there’s any truth to any such dish.

In November, the Keeping Up with the Kardashians beauty filed suit against her former publicist, Jonathan Jaxson, for claiming that she was still professing her love for Reggie just days before her August wedding to Kris.

We can think of at least one person who won’t be doing any cartwheels upon learning that Reggie’s been breaking bread with Kim: The athlete’s mom.

Denise Griffin is allegedly an outspoken Kardashian critic, who previously forbade Reggie from reuniting with the reality sudster star.

“Reggie is a momma’s boy. He knows how his mother feels and doesn’t want to disappoint her. Unless he can change his mother’s feelings, Kim has little change of getting back with him.”