Lady Gaga, you’re officially off the hook: An anti-defamation religious group wants an apology from Nicki Minaj after the rapper delivered a “vulgar” and controversy-charged performance at last weekend’s Grammy Awards. 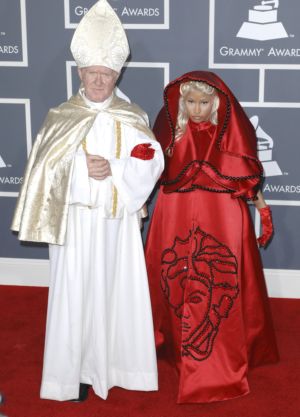 Hate to say we told ya so, but…

In news that should surprise absolutely no one, the Catholic League is offended and thoroughly underwhelmed by Nicki Minaj‘s controversial stage spectacular at Sunday’s 54th Annual Grammy Awards.

The always outre femcee snatched a page from Lady Gaga’s book of oddness when she hit the red carpet dressed in a red cloak-cape designed by Versace. Nicki tried her hand at a Madonna “Like a Prayer”-esque production at the weekend prize-giving, complete with religious overtones and a Rent-a-Pope (still yet to be identified by celebrity informants).

Yep, that went over about as well as you’d expect.

Of course, the real drama began when Nicki took the stage to perform her new single “Roman Holiday,” which included a pre-taped segment of a mock exorcism and a confessional. The live performance left thousands of tweeting fans scratching (and shaking) their heads at the myriad of dancing monks and priests.

Did we forget to mention the part where cloaked dancers began praying to each other’s privates? (Yeah, we wouldn’t want you to miss that.) At one point, a horizontal Minaj was suspended high above the stage Exorcist-style as the choir belted out “O Come, All Ye Faithful.”

Anti-defamation organization The Catholic League has angrily branded the display “vulgar.” But it isn’t just Nicki who’s being taken to task.

The League’s spokesman, Bill Donohue, says the group is seething over the performance, but members are also upset with the Recording Academy’s decision to allow it in the first place.

“None of this was by accident, and all of it was approved by The Recording Academy, which puts on the Grammys,” Donohue said in a statement Monday.

“Whether Minaj is possessed is surely an open question, but what is not in doubt is the irresponsibility of The Recording Academy. Never would they allow an artist to insult Judaism or Islam,” he continued.

“It’s bad enough that Catholics have to fight for their rights vis-á-vis a hostile administration in Washington without also having to fend off attacks in the entertainment industry. The net effect, however, will only embolden Catholics, as well as their friends in other faith communities.”

The morning after the show, Nicki dropped by Ryan Seacrest’s nationally-syndicated radio show, On Air with Ryan Seacrest, to gab about her Grammys set. The “Super Bass” star didn’t offer that apology Bill was looking for, but she did provide an explanation for her — ahem– colorful approach to performing “Roman Holiday.”

Nicki’s excuse: The producers made me do it!

“The Grammys chose ‘Roman Holiday,” Minaj told Seacrest on Monday. “The producers of the Grammys came into the studio and they heard ‘Roman Holiday’ and I could not play them another record after they heard that. I could have chosen to do a no-brainer pop song, but I can’t do it anymore. I have to stay true to what I’m doing.”

Do you think Nicki Minaj should issue an apology for her over-the-top performance?