Chris Brown made a triumphant return to the Grammys last night — but not everyone is happy about it. Read on to find out who’s throwing haterade at Breezy. 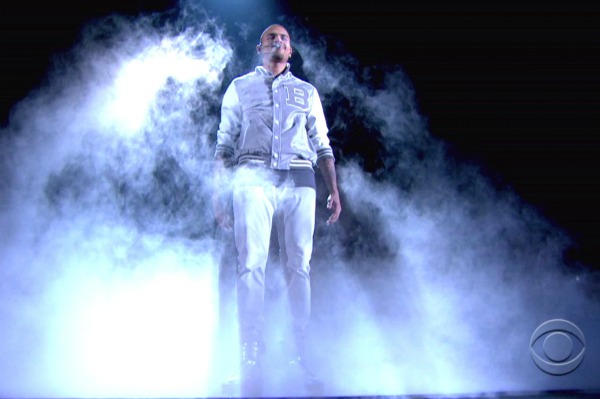 Are you disgusted by the way Chris Brown was welcomed back into the Grammy fold like he never beat the crap out of Rihanna? You’re not alone. Celebrities and regular people just like us expressed their disbelief that just over three years to the day that the singer beat the crap out of Rihanna, he was not only asked to perform at the awards but won for Best R&B Album.

Grammy presenter Miranda Lambert was particularly incensed. “Chris Brown twice? I don’t get it. He beat on a girl,” she wrote on Twitter Monday. “Not cool that we act like that didn’t happen. He needs to listen to ‘Gunpowder’ and lead and be put back in his place. Not at the Grammys.”

The country superstar was referring to her hit single “Gunpowder and Lead,” in which the lyrics describe a woman’s plans to murder her abusive husband when he is released from jail.

Music fans were just as upset that Brown received the accolades he did.

“Remember when Adam Lambert kissed a man on TV and was blacklisted?” wrote Twitter user @aurosan. “Remember when Chris Brown beat Rihanna and won a Grammy?”

Brown would not have been able to perform if Rihanna had not asked for the restrictions on his restraining order be mostly lifted, but she seemed to have her own message for her ex-boyfriend Sunday night.

Taking the stage after Brown’s awkwardly lip-synced dance routine, Rihanna let loose a pointed performance of her single “We Found Love,” the video to which is an obvious reenactment of her violent relationship with Brown — including specific references to the beating.

But Brown’s feeling was screw the haters. He posted on Twitter after his win, “Team breezy we have come along way and I’m so appreciative of you guys!!!! No matter what anyone says… WE MADE IT!!”

Tell us: Should we pretend Chris Brown didn’t beat Rihanna?