Watch out, Atlantic City! You’re about to get Jersey Shore-d, courtesy of DJ Pauly D! Can you handle it? 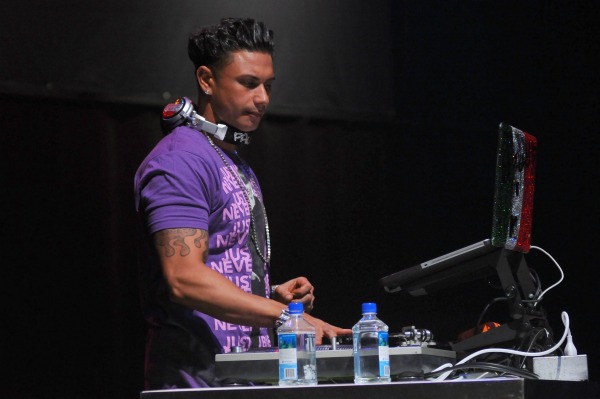 Jersey Shore‘s Pauly D doesn’t play around when it comes to his DJ career. Kim Kardashian commissioned the guido for his services in the past, so you know he’s good with a mic and a turntable.

DJ Pauly D, real name Paul Delvecchio, will be the new resident spinner at The Pool at Harrah’s.

If you’re not familiar, The Pool at Harrah’s is a swimming pool/nightclub at Harrah’s Resort Atlantic City.

Looking to catch his act? Then mark your calendar for March 31, when he’ll make his spinning debut, with a follow-up appearance on April 28.

According to a report from the Associated Press, a Harrah’s spokeswoman said the casino is looking to have him perform at least nine dates throughout the year.

While many of the JS cast has outside projects, Pauly D’s career seems to be taking off. He was voted the eighth best DJ in America by Vibe magazine back in 2010 — not bad if you ask us!

That’s not all. Pauly D’s spinoff will premiere right after the debut of Punk’d on March 29.

The Pauly D Project will focus on Pauly’s life away from Seaside Heights as he continues to DJ, lands a record deal and chills with friends from his home state of Rhode Island.

We want to hear from you. Are you ready for more Pauly D? Head over to our comments section and sound off!

Will you be watching?