Adele’s Grammy sweep last night was particularly poignant considering she’s been silenced for the last few months after undergoing serious vocal surgery. Read on to find out why the singer said it was the best thing that ever happened to her. 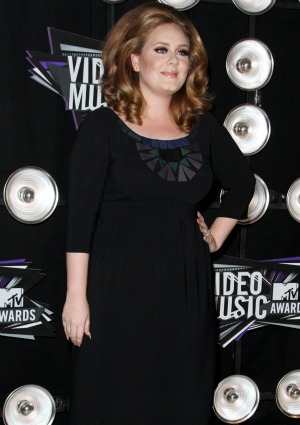 Adele‘s triumphant return to the stage last night at the Grammys sealed her place as a musical superstar — but it almost didn’t happen. Vocal problems plagued the singer throughout 2011 and could have ended her career. After surgery and complete vocal rest she is at the top of her game again — and now Adele says her months of silence were necessary to keep her sanity intact in the hurricane of fame swirling around her.

“It was so fast-paced, I could hardly ever even remember the bulk of my day,” the Grammy winner told Vogue. “I think I just needed to be silenced. And when you are silent, everyone else around you is silent. So the noise in my life just stopped. It was like I was floating in the sea for three weeks. It was brilliant.”

“I had so much time to kind of go over things and get over things, which is amazing. I think if I hadn’t had my voice trouble, I would never have broached those subjects with myself. Now I just feel really at peace. And really proud of myself. I’ve never fully appreciated the things that I’ve achieved until now. In fact, my entire life has changed in the last ten weeks.”

Adele’s third record not yet on her radar >>

She is definitely happy today: The Brit swept all six categories in which she was nominated at the Grammys, tying Beyoncé‘s record for the most number of trophies taken home by a female artist in a single year.

And P.S.? She sounded a-flipping-mazing.

Watch Adele accept the Grammy for Album of the Year:

Read the rest of the Adele interview on Vogue.com.