Abraham Lincoln was a vampire slayer? In the world of vamp lore, anything is possible. You know you’re intrigued. So are we! 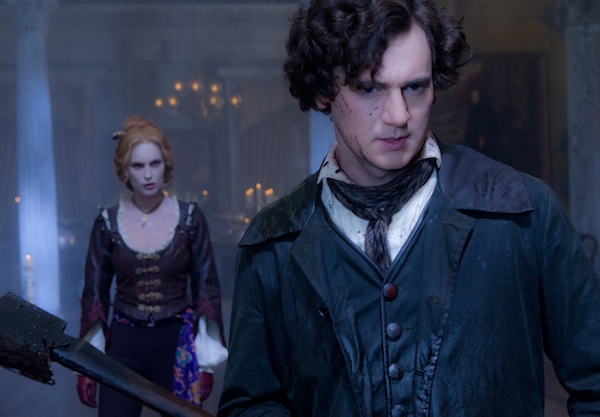 You thought that was a job only Buffy could do, right? Not in this day and age, when it seems like just about anyone can pick up a stake and do some damage.

The film is an adaptation of the best-selling novel Abraham Lincoln: Vampire Hunter by Seth Grahame-Smith. The story starts when Abraham Lincoln’s mother is slain by a vampire. When the young politician finds out the truth about her death, he sets out on a lifetime quest to destroy those who call themselves undead.

And that’s only the beginning…!

Everyone knows what happens when you try to track down one vampire. You find a few more. Abraham Lincoln is in for a surprise when he charters into the unknown territories of creatures of the night. The premise is based on the idea that Lincoln had a set of secret diaries that tracked the creatures of the night. In the book, a vampire named Henry Sturges, played in the film by Dominic Cooper of My Week with Marilyn fame, gives the diaries to an author to write the novel that tells these secrets. We can only wonder what happens in the film. The first-look trailer is as mysterious as Lincoln’s secret diary.

The film also stars Mary Elizabeth Winstead of Final Destination 3 and The Thing and Anthony Mackie of Real Steel and Man on a Ledge. SheKnows brings you a first look at the devilishly dark tale about vampires in America during one of its most volatile times, the 19th century.