The period after the Civil War in the American South was a difficult one. The country was still seething with racial tensions. Taylor M. Polites captures the atmosphere of that time perfectly in his historical novel The Rebel Wife.

Augusta Branson, or Gus to her friends, was born into a wealthy and aristocratic antebellum family in Alabama. But when the war came, her family’s fortunes changed, and Augusta was married to Eli, against 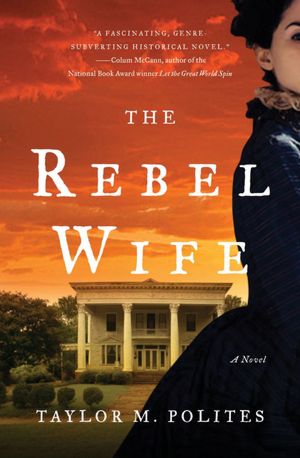 her will and in circumstances she still doesn’t fully understand. Augusta’s family were proud slave owners, but Eli is active on behalf of slaves — eager to ensure they receive the full rights of any American. Now, the war is over and the South has lost. The people in Gus’s town look at her differently, assuming she ascribes to her husband’s radical views.

But everything changes for Augusta in an instant, when Eli catches some sort of blood fever. No one could have predicted the rapidity of his demise. Before she can blink, Gus is a widow. She has no knowledge of Eli’s business, nor whether he provided for her and their son — and as a woman, she can’t manage these affairs herself. Augusta is forced to rely on her old family friend for guidance, but quickly realizes that he isn’t being truthful with her.

Unsure of whom she can trust, Gus turns to a former slave and companion of Eli’s for help. As she learns more about Eli and his business, Augusta must put aside her past convictions and embrace what few friends she has, as she struggles to survive in this new world.