The Hunger Games pandemonium is picking up speed! With just 38 days remaining until the highly-anticipated film hits theaters we count down 10 reasons this movie is going to rock! 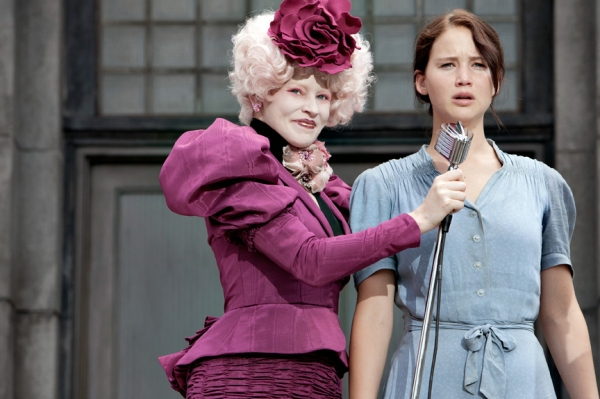 Twitter is abuzz with “We Love The Hunger Games” messages, and fans — we’re right there with you. With just 38 days to go until the first film hits theaters March 23, here’s a list of 10 reasons we’re pumped for The Hunger Games!

Word breaks that though The Hunger Games movie won’t be narrated by Katniss (played by Jennifer Lawrence), viewers will be experiencing the drama of Panem through her eyes. Director Gary Ross explained, “I’m not using voice-over for her. This thing is all from Katniss’ perspective. It is a first-person point of view.”

There’s no resting on laurels, waiting to be saved from certain doom for Katniss Everdeen. The Hunger Games‘ main character exemplifies all of the best a female has to offer: Loyalty, strength, perseverance and determination. Three cheers for fierce female leads!

Kellan Lutz desperately wanted a part in The Hunger Games, but producers reportedly made the call not to allow anyone from Twilight over to Panem. As many have already tried to draw similarities between the two stories, we think this was a smart call. Don’t you agree?

4. Casting is coming through

Woody Harrelson as Haymitch? That bit of casting news was a bit hard to swallow, and yet the more we see of The Hunger Games posters and trailers, the more it’s starting to come together. Not everyone is as we pictured them to be while reading, but with Suzanne Collins’ hand guiding the way we have faith the movie will pull through!

Enough with Sparkles and Wolf Boy, it’s time to see some real guys fight for love. We’ve read of Katniss’ torn heart, but now we’re ready to see Peeta and Gale in action. No spoilers here for those of you who haven’t read all three of The Hunger Games books yet!

The sound of The Hunger Games just keeps getting better as more big names are announced for the film’s soundtrack. Currently in the roster sit Taylor Swift, Kid Cudi, Arcade Fire, Neko Case and The Decemberists. Adding an element the book couldn’t, we can’t wait for what is being described as a “hauntingly beautiful” soundtrack.

As shared by one user on Twitter Monday, “I work out because I know I would’ve been the first to die in The Hunger Games.” Love it! Take that inspiration wherever you can get it.

From Facebook fans earning rights to their very own district, to an Internet-wide puzzle piece hunt we’ve seen the promotion for The Hunger Games will stop at nothing. Hard core fans are currently invited to ramp up their personal style with Capitol Couture.

Haven’t read The Hunger Games book yet? Never fear, there’s still time to gobble up this piece of literary candy. Yes, The Hunger Games is young adult fiction, but rather than turn a cultured nose up in the air over the categorization, enjoy the wild ride this easy read provides. Heck, you don’t even have to go out to pick up the book — the first two chapters are available free online!

As hard as it will be to wait for The Hunger Games sequels to come out (Catching Fire is scheduled for Nov. 22, 2013) there’s something great about a series of films. Can you imagine if Suzanne Collins had stopped at just one book? Though the many months between films will be painful, we’ll take it!

What about The Hunger Games are you most looking forward to?