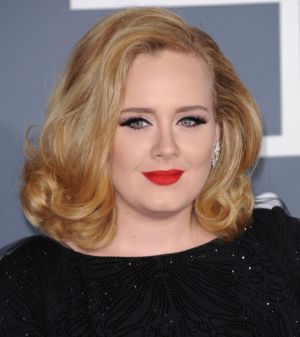 Songbird Adele swept Sunday night’s Grammy Awards ceremony — but her fellow Brit Noel Gallagher thinks fans should take a good look at the pop powerhouse while they still can.

By Gallagher estimation, the “Rolling in the Deep” hit-maker is quickly approaching the eleventh hour of her 15 minutes of fame.

The Oasis rocker, 44, says despite winning a string of awards, including all six of the Grammys she was nominated for at the weekend prize-giving, 23-year-old Adele will struggle to remain relevant on the charts.

…And it’s all because she has a vagina.

“I feel sorry for girls in the music industry. They do have a very short shelf life,” the out-spoken musician retorted in a chat with Live magazine this month. “For instance, Duffy: who? Gone. She was massive. And I don’t doubt for a second that the same thing will happen to Adele.”

Noel’s never been one to mince words. He’s the same cranky Brit that created a firestorm of controversy with his no-holds-barred opposition over the appointment of Jay-Z — a rapper — as headliner of rock’s Glastonbury Music Festival a few years ago.

Last September, the “AKA, What A Life” singer unleashed a barrage of insults on Lady Gaga in an interview with Q magazine.

“I don’t give a f***ing monkey’s a** about Lady Gaga. It’s all about the meat suit and the controversy. Is it about music? Really? She’s got the publicity side sorted, but where is the music,” Noel thundered.

“Twenty years from now, will we listen to Lady Gaga? No. She might think she is making a stand for the freaks and the weirdos. But they’re not going to have any decent music to play are they,” he added.

And it’s not just career longevity that female singers have to worry about: Noel insists that men in their 40s are more attractive than women of the same age.

“Grazia put me at the top of their Chart of Lust twice last year, so I must be doing something right. A woman of a similar age wouldn’t look as good.”

Geez Noel, tell us how you really feel.

Gallagher joins Chanel designer and fashionable uber-b***h Karl Lagerfeld among the ranks of Adele’s critics. Karl unintentionally sharpened his claws on the superstar singer in an interview with a Parisian newspaper last week.

A Metro reporter quizzed Lagerfeld for his opinion on the pop stars of the moment. He replied, “The thing at the moment is Adele. She is a little too fat, but she has a beautiful face and a divine voice.”

Karl later apologized for the jab.

Do you think Adele’s talent will stand the test of time?