Rap star Nicki Minaj is making headlines after delivering a spooky performance of her latest song, “Roman Holiday,” at the 2012 Grammy Awards. Minaj hit the Grammy stage for a live number that included a faux pope and an apparent exorcism. 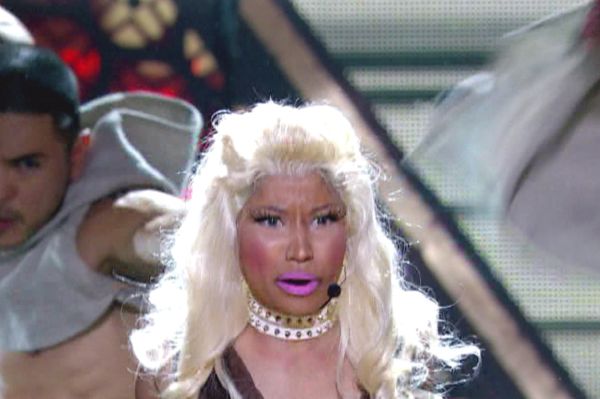 Lady Gaga has infuriated the Catholic Church and died on stage since bursting onto the pop scene in 2008. So for her performance at the 54th Annual Grammy Awards, Nicki Minaj decided to up the ante by doing both at the same time!

The First Lady of Young Money is the talk of the blogosphere the morning after the prize-giving, after a chilling performance of her new single “Roman Holiday,” which came complete with an on-stage exorcism, religious imagery and even a Pope impersonator.

The hip-hop star arrived at the Grammy Awards in Los Angeles draped head-to-toe in a scarlet Versace creation designed especially for her. And if anyone doubted what she was supposed to be dressed up as, the Pope Benedict lookalike who walked the red carpet with her offered an additional clue.

The “Super Bass” singer kicked off her Grammys appearance with a performance she labeled “The Exorcism of Roman.” Minaj’s show began in a confessional, with the hip-hopster singing excerpts from her hit single “Roman’s Revenge” and West Side Story’s “I Feel Pretty” to a priest.

The performance then transitioned into a pre-recorded video, in which the femcee — in character as her alter ego Roman Zolanski — was visited by another priest, who came to perform an exorcism. The video then switched back to the live performance, which featured Minaj chained to a slab for a grisly demise.

Minaj — who lost the Best New Artist prize to Bon Iver — was suspended in the air at one point during her eclectic performance.