Less than 24 hours after the death of Whitney Houston, her daughter Bobbi Kristina Brown has been rushed to the hospital. What happened? 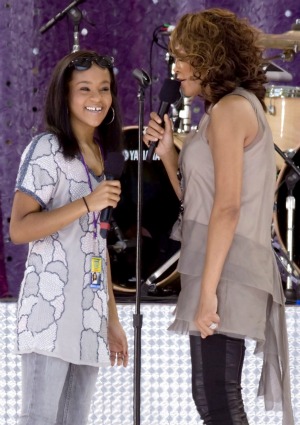 Whitney Houston‘s daughter Bobbi Kristina Brown has been rushed to the hospital less than a day after her mother’s untimely death.

Beverly Hills police confirmed that an ambulance was called to the Beverly Hilton — the scene of Whitney Houston‘s death, where Bobbi Kristina was staying with her mother — in response to a call expressing concern over the teen’s health.

While Bobbi Kristina was said to be “awake and alert,” an insider told TMZ that this is her second trip to the hospital since last night and is “hysterical, exhausted and inconsolable.”

Unfortunately it may have been her family’s misguided attempt to calm her down that caused her first medical emergency. The teen had a few drinks in an attempt to calm herself down, but when it didn’t work she was given a sedative. Bad mix.

“She was distraught, on the verge of a complete breakdown,” a source told RadarOnline. “Not knowing what to do, members of her mother’s entourage tried to calm her down with a sedative. The two were an unfortunate mix and she ended up passing out.”

It is unknown what caused the second trip to the hospital.

In the hours immediately following the singer’s death, witnesses say Bobbi Kristina tried to access the suite where police were conducting the initial death investigation and got into a heated shouting match with officers stationed at the door. The 18-year-old reportedly “screamed, cursed and demanded to see her mother” before finally leaving. Cousin Dionne Warwick was also turned away.

As the child of two long-term drug addicts — Houston’s ex Bobby Brown is her father — Bobbi Kristina had a uniquely codependent relationship with her mother.

“In a way she was the adult in relationship,” Drew said.

Bobbi Kristina has aspirations of following in her mother’s artistic footsteps, but despite photos that surfaced last year purporting to show the teen snorting cocaine she denied that drugs have any place in her life.