Who said there are no true romantics left in the world? The pre-Valentine’s Day weekend at the box office was a smashing hit for The Vow, a romance about finding love all over again. 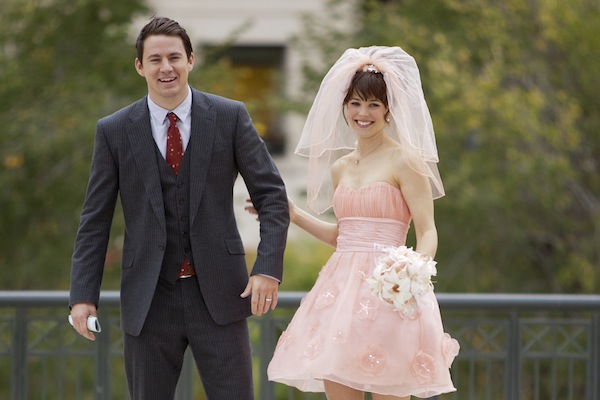 The Rachel McAdams and Channing Tatum romance about a woman who loses her memory and must fall in love with her husband again is a smashing hit this weekend at the box office, grossing an estimated $41 million, according to The Wrap. The Vow contributed to the record-breaking weekend for movies. More than four films opened over $20 million. That’s a lotta cash, Hollywood!

This is a surprise for studios and critics who usually expect thrillers to take the top spot on opening weekends. There must be more than a few date night outings that helped this movie climb to first.

Coming in a close second, with an estimated $39.3 million is the thriller Safe House, co-starring Denzel Washington and Ryan Reynolds. The story is about a rookie CIA agent who gets more than he bargained for when raiding a safe house harboring a known fugitive.

Bringing in an estimated $27.6 million and coming in third is the action adventure Journey 2: The Mysterious Island. The family adventure in the tropics stars the beefy Dwayne Johnson, Josh Hutcherson and Vanessa Hudgens.

In a surprise ranking that really didn’t surprise anyone, George Lucas grabbed a top ten spot with his 3-D release of Star Wars: Episode 1 — The Phantom Menace. The mega epic appears to be unstoppable when it comes to getting fans into the theaters. Coming in fourth with $23 million, Phantom Menace is still a hit.

Last week’s first place, Chronicle, couldn’t hold onto its spot forever, but the film about teenagers who acquire super powers but then don’t know what to do with them, grabbed an estimated $12.3 million, giving it the fifth place ranking in this top ten.

The Woman in Black, the exciting horror thriller starring Harry Potter‘s Daniel Radcliffe couldn’t beat out Chronicle although it made a good showing with $10.3 million, landing it in sixth place.

Movie review: Daniel Radcliffe is scary Potter in The Woman in Black >>

Holding strong in the top 10 for several weeks are George Clooney’s Oscar-nominated The Descendants coming in ninth with $3.5 million and Kate Beckinsale’s vampire-action flick Underworld: Awakening coming in tenth with $2.5 million. Love is in the air at the box office. There’s no telling what will happen next week.