Bobby Brown is devastated that his ex-wife Whitney Houston died — but he has his bandmates to lean on. Read on to find out how he reacted to the news of the shocking death, and what the rest of New Edition has to say. 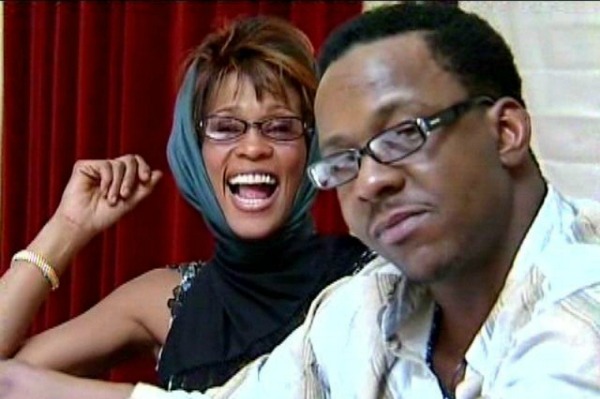 Bobby Brown and Whitney Houston may have ended their tumultuous 15-year marriage acrimoniously, but the New Edition singer is said to be absolutely devastated over the death of the 48-year-old legend.

Brown is currently in Mississippi with New Edition, the singing group that made him famous, and sources say he is distraught and “in and out of crying fits.”

New Edition member Johnny Gill told CNN, “Bobby is struggling and devastated,” but still planned to attempt to sing with the group at a scheduled show Saturday night.

Houston and Brown were a toxic couple together, with Whitney spiraling deep into what would become a lifelong drug habit during their marriage. Bobby also struggled with drug addiction during their time together, being arrested multiple times for everything from battering his wife to drunk driving.

The couple’s relationship was revealed in graphic — and often shocking — detail on the reality show Being Bobby Brown, the highlight of which was Bobby discussing digging a “doodie bubble” out of Whitney’s posterior when she was constipated.

Houston later told Oprah Winfrey that she only agreed to appear on the reality show in a misguided attempt to be a supportive wife, as her career had greatly eclipsed Brown’s. She also alleged that she and their daughter Bobbi Kristina suffered from physical and emotional abuse at the hands of the man who was supposed to protect them, and that Brown was a serial cheater.

New Edition released a statement in support of the family of Whitney Houston in the wake of her death.

“We are absolutely shocked and saddened by the sudden and untimely death of our dear sister Whitney,” they said. “As a group, we are extremely close; when one of us hurts, we all hurt.”

Whitney Houston photo gallery: A tribute to her life and career >>

“As much as we are in pain right now, we will continue to draw strength from God, as we support and comfort our brother Bobby, their daughter Bobbi Kristina and Whitney’s mother Cissy Houston. Our thoughts and prayers remain with the entire Brown-Houston family today and always.”

While it is too soon to know a definitive cause of death — the singer’s body had no visible injuries — many are speculating that she overdosed, and in the coming days we can expect to see a lot of fingers pointing at Brown for allegedly starting her down the path to ruin.