Who’s the daddy? Modern Family has found the perfect actor to play Eric Stonestreet’s father. He’s tall, stocky and could throw a football with the best of them. Introducing Merle Tucker aka Barry Corbin. 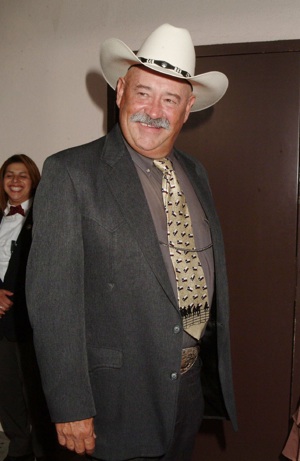 Fans of ABC’s Modern Family know the Pritchett’s like the back of their hand. That’s why the writers are exploring their extended family tree. Hold on to your seats, because Big Daddy Tucker is coming for a visit.

According to TV Guide, Cameron and his dad are polar opposites. Cam may know his way around a football, but he’s got nothing on Merle. The character’s described as “a solid, masculine, Midwestern, gruff guy.”

The last time we saw a primary member of the Tucker clan was in 2010, when Celia Weston (Alice, Memphis Beats) guest starred as Cam’s mom. Barb Tucker was sweet and affectionate, which is a stark contrast to Merle.

Physically, Stonestreet and Corbin are believable as father and son. They have similar facial features, the same body build and are close in height.

Corbin’s previous TV credits include Northern Exposure, The Closer, Dallas and One Tree Hill. Over the course of his career, he’s been nominated for three Primetime Emmys, twice for Northern Exposure and once for the documentary Moon Shot. He’s also made appearances in feature films such as No Country for Old Men and In the Valley of Elah.

Since Corbin spent years as a regular on Dallas, we wonder if he’ll channel his inner J.R. Ewing for Merle? We think it could work.

Corbin’s episode of Modern Family will air during May sweeps.

What do you think of Cameron’s papa? Is Corbin the perfect choice?