In The Secret World of Arrietty, a sickly young boy finds a mysterious world hidden under his floorboards and makes a beautifully drawn friend. 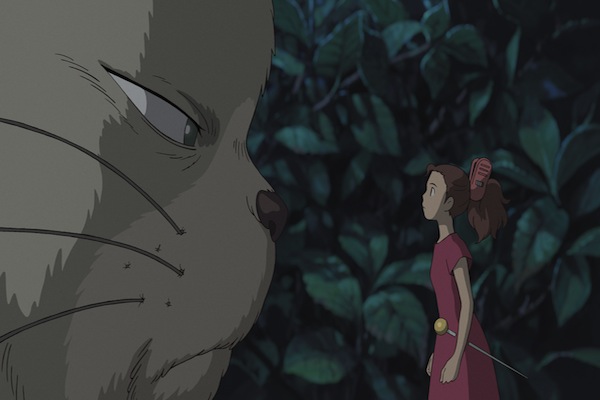 Children have been fascinated by the idea of little beings for millennia, perhaps because of the shared and often frustrating experience of being small. Some of these imagined creatures are magical, like fairies or leprechauns and some are just regular old minuscule folks, like gnomes or Lilliputians. In The Secret World of Arrietty, Shawn, voiced by David Henrie, discovers the pocket-sized Clock family, known as “borrowers.” Though they have no magical abilities, they are quite skilled at stealthy missions into human homes to “borrow” only what they need for survival. Based on Mary Norton’s novel, The Borrowers, the Clock family has a lot at stake if they are found out.

As young Shawn awaits heart surgery in the country with his aunt and her housekeeper, he can’t resist searching for the tiny people his mother told him live in the nooks and crannies of the house. Soon, Shawn desperately tries to befriend the Clock’s 14-year-old daughter, spunky Arrietty, voiced by Bridgit Mendler, best known for the Disney Channel‘s Good Luck Charlie.

Arrietty is an impassioned, lively young lady and is well counterbalanced by Shawn’s melancholy fear of death. Almost a romance, Arrietty helps Shawn to focus on the beauty of life and to value the people around him.

This lovely animated film consists of luxurious hand-drawn frames that are an intriguing mix of Japanese and Western styles. The experience of the film is slow and steady, like rafting down a trickling stream. There’s plenty of time to absorb this world, perhaps a little too much time for the adults in the audience, but surely it is a refreshing break from any of the loud, jarring animated films made to compete with superhero movies. And the vocal performances, even by three of Hollywood’s top comedians, are understated and gentle. Real-life couple Amy Poehler and Will Arnett supply the surprisingly subtle and down-to-earth vocal performances of Arrietty’s parents. Carol Burnett is a genius choice for the voice of devilish housekeeper, Hara.

Bottom line:  The Secret World of Arrietty is a quiet, almost meditative experience that brings thoughtful characters into a stunningly lush visual arena. With both style and substance, it is a good alternative to many of the shrill animated squawkers offered to kids today.