There’s a major discrepancy between what Lady Gaga says, and what Lady Gaga does. Is it time for the megastar, idolized by fans far and wide, to fess up to her hypocritical ways? 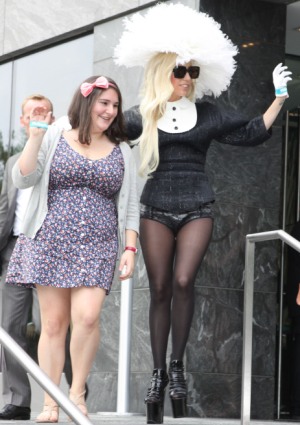 Who’s that girl with horrendous habits and loads of advice? It’s Gaga!

Mother Monster may say she’s sick of the female body image struggle but that doesn’t mean she’s ready to lead by example. The self-confessed “drunk diet” user seems to be sending mixed messages to legions of Lady Gaga fans by telling them to end the “diet wars” but continuing on with her own unhealthy habits.

Confessing to a history of bulimia Lady Gaga recently told one fan struggling with her own body image, “I’m gonna say this about girls: The dieting wars have got to stop. Everyone just knock it off. Because at the end of the day, it’s affecting kids your age. And it’s making girls sick.”

Yet in the same conversation the “Born This Way” hit-maker fessed up to allowing her own image to be contorted and slimmed down using tricks of the trade. “Every video I’m in, every magazine cover, they stretch you — they make you perfect. It’s not real life.”

Aside from an unwillingness to insist she appear full-sized for the sake of emulating fans, Lady Gaga previously explained her whiskey tango ways to The Morning Mash Up:

“I am on the drunk diet. I live my life as I want to, creatively. I like to drink whiskey and stuff while I am working. But the deal is I’ve got to work out every day, and I work out hung over if I am hung over.”

Couple that bit of overindulgence with Lady Gaga’s 2010 proclamation “Pop stars should not eat,” and you’ve got a recipe for a slim, dangerous lifestyle — a method currently being taken to publication by the singer’s former boyfriend, Lüc Carl.

Yes, those of us who hope to someday also get away without wearing pants in public can learn of the Lady’s true dietary habits via the book Drunk Diet, due out early this year. Carl promises imbibing potential buyers:

“After reading countless books and being told time after time that it’s impossible to lose weight while drinking alcohol heavily, Lüc Carl decided to take matters into his own hands. Join him on his journey to lose 40 pounds, without giving up his principles of being a hard drinking party maker.”

Here’s what Gaga wants you to do: Eat healthy, stop worrying and be kind to one another.

Here’s what Gaga does: Drinks alcohol, works out hung over and allows her image to be altered to appear slimmer than it actually is to adoring fans.

When SheKnows asked Facebook followers what they think of what Gaga is saying versus doing one fan put it bluntly, “It’s hypocritical. Actions speak louder than words.”

This particular writer couldn’t agree more, and yet there’s something epically human about Lady Gaga’s hypocrisy. The woman looked at as an idol, leader to throngs, can’t get her s**t together either.

We all know what it takes to live healthy, but it’s d**n hard to do. Lady Gaga, the human being as imperfect as the rest of us, is struggling with it, too. That’s why she’s been caught saying one thing and practicing another.

Be ye a fan or a hater, idolizing any one human being is, in essence, asking to be disappointed. This person who’s been put on such a high pedestal will inevitably fall in one way, at one point or another.

Kudos to Stefani Germanotta for opening up about her eating disorder struggles, as surely that honesty struck a chord with more fans than one would hope, but please, take your own advice to heart and live healthily. We’d like to see you around for a while longer.