Madonna was not amused by M.I.A.’s little attention-seeking stunt at the Super Bowl. Read on to find out exactly what she thinks of M.I.A. and her bad behavior. 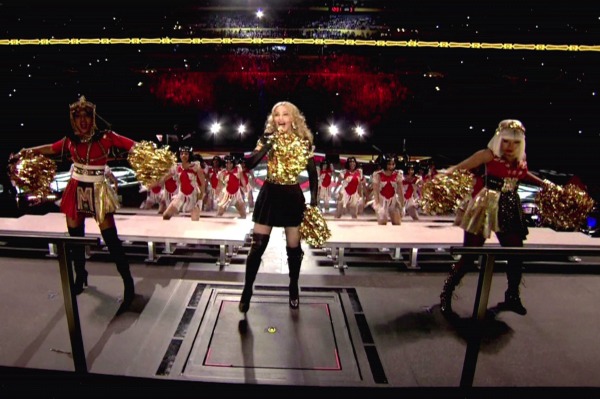 Who dares take attention away from Madonna? The iconic singer is less than pleased about the stunt M.I.A. pulled at the Super Bowl and she told Ryan Seacrest all about it this morning.

“To tell you the truth, I didn’t even know about it. I actually didn’t know until I left,” Madonna said when she called in to KIIS-FM’s On Air with Ryan Seacrest.

“I found out about it in the elevator on my way to go to the car to get to the airport. I was really surprised. I didn’t know anything about it. I wasn’t happy about it, because for me — I understand it’s kind of punk rock and everything — but to me there was such a feeling of love and good energy and positivity.”

“It seemed negative,” Madonna explained. “It’s one of those things that’s such a teenager, kind of, irrelevant thing to do in one respect. But on the other, there was such a feeling of love and unity there. What was the point? It was just out of place.”

We know who M.I.A. was flipping off at the Super Bowl >>

Speaking of love and unity, the one moment that stood out above all others during her halftime performance was her final bit, “Like A Prayer.”

“It was actually very emotional for me. I almost starting crying,” she told Seacrest. “I felt an incredible sense of — I know it sounds cheesy, but — warmth, love, support. Everybody turning on their flashlights, holding up their phones, to see the entire stadium lit up like candles with the video-mapping over us and the choir singing around me — it was like a religious experience.”

M.I.A. has apologized for flipping the bird and singing “s**t,” blaming her outburst on nerves. Madonna has decided to let her live — this time.