In the quirky comedy about finding a friend when the world is literally crashing down around you, Steve Carell and Keira Knightley make for a comedic odd couple in Seeking a Friend for the End of the World. 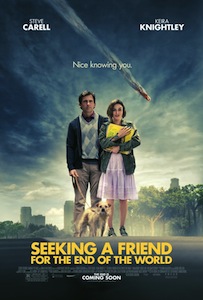 Steve Carell and Keira Knightley are an odd couple dealing with an even odder situation. The earth will be destroyed by a meteor in three weeks, and there’s nothing anyone can do to stop it.

Carell plays Dodge, an office worker who finds out — along with the rest of the world – about the demise of the planet. Panicked, emotional and completely out of their minds, everyone else responds in stride.

Dodge on the other hand seems to have a deadpan approach to this looming disaster. He was lonely before he found out the earth was being destroyed, and he’s lonely now.

The king of quirk

Known for his outrageous roles in films like The 40-Year-Old Virgin, Get Smart and Date Night, Carell has found a voice lately in the world of quirky, indie comedies. Die-hard fans get goose bumps when talking about his performances in Crazy, Stupid, Love and Dan in Real Life.

Seeking a Friend for the End of the World is the perfect mix of his two styles. Outrageous premise meets quirky comedy. And that’s not all. It has the element of romantic comedy (hooray!) when Carell’s character meets up with the adorable yet slightly neurotic Keira Knightley.

The two spark up an unusual friendship in order to help each other confront life’s regrets. This newfound connection might be all Dodge needs to give his final days some meaning.