Jennifer Lopez and Marc Anthony say their divorce is amicable as they try to work together on their new talent contest — but you can definitely feel the tension during their appearance on The Ellen DeGeneres Show. 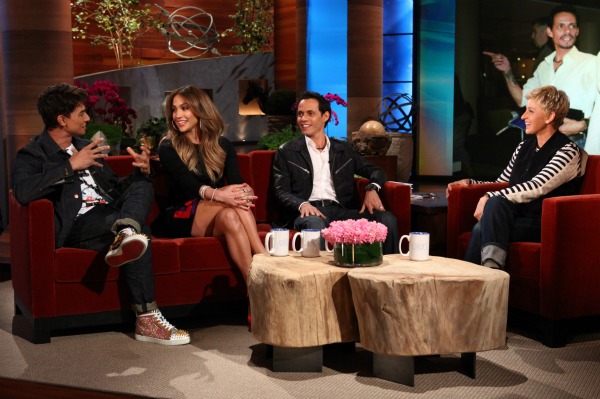 The new Sonny and Cher? That’s what Jennifer Lopez and Marc Anthony claim to be, but their bickering is getting more awkward and less cute every day.

Case in point: An interview on The Ellen DeGeneres Show set to air Monday. While promoting their new talent show Q’Viva, the two bickered the whole way through — even making Ellen a little uncomfortable.

After playing a clip from Q’Viva showing Lopez smacking Anthony on the head, the soon-to-be ex-husband looked visibly annoyed.

“Where’s the camera… next question,” he tried to joke.

“They put a sound effect in there,” Lopez said in her own defense. “It sounds like I’m slapping him hard… all I did was this,” demonstrating a light tap on Anthony’s head.

“She can’t help herself… Trust me, it hurt,” Anthony retorted.

Jennifer Lopez and Marc Anthony: On the road to reuniting? >>

DeGeneres tried to be diplomatic, saying, “The dynamic between the two of you is so much fun to watch. You know I love you both individually. And I just love watching you on camera. Regardless of anything, but the dynamic between you two is fantastic to watch.”

The two joked about their so-called tempestuous relationship in a recent interview with Entertainment Weekly.

“She’s a little difficult, but she’s actually not as bad as I thought she’d be,” Anthony said of his ex. “I was really nervous coming into today, because I had heard nightmare!”

“He, on the other hand? Everything is true. All a nightmare,” Lopez zinged back.

Jennifer Lopez and Marc Anthony announced their split in July 2011. She is currently dating backup dancer Casper Smart, while he has moved on with Venezuelan model Shannon De Lima.