The Twilight Saga won’t go down without a fight. There’s still one sequel left in the series and it’s holding on for dear life. The first footage from Breaking Dawn — Part 2 will make its big debut alongside Gary Ross’ The Hunger Games. 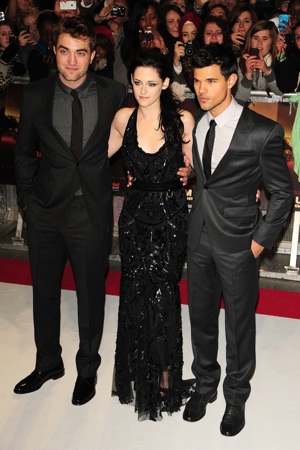 It’s no secret that The Hunger Games is the heir to the Harry Potter and Twilight thrones. But before its takeover can begin, there’s still one Twilight waiting in the wings: Breaking Dawn — Part 2.

Twilight has already shown that it can bring in the big bucks. The Hunger Games is a successful novel but still has to prove itself as a film. The Twilight trailer could bring in viewers, who might otherwise skip the feature.

On the flip side, The Hunger Games is nothing to sneeze at. It has something the Twilight series doesn’t — a male audience. The Hunger Games has a strong female lead and several male stars who aren’t overly romanticized.

Twilight mostly centers on a love triangle, whereas The Hunger Games is about kids fighting for their lives. There’s an element of survival and competition that’s more attractive to male viewers.

According to The Los Angeles Times, Lionsgate spent nearly $100 million on The Hunger Games, even before tax credits and international pre-sales, making it their biggest film budget to date.

As for Twilight, the series has grossed $2.5 billion at the worldwide box office. It’s also earned millions in merchandise, which includes clothing, accessories and gum. Yes, there’s Twilight gum.

You can catch the first trailer for The Twilight Saga: Breaking Dawn — Part 2, when The Hunger Games hits theaters March 23.