Paul McCartney has joined his Beatles bandmates and finally gotten his own star on the Hollywood Walk of Fame. Read what he had to say about the honor. 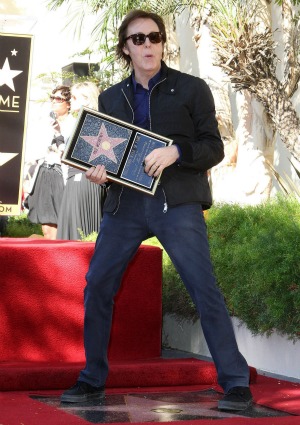 He may be the last Beatle to be honored with a star on the Hollywood Walk of Fame, but for Paul McCartney the timing couldn’t be more perfect. He finally got to join Ringo Star, George Harrison and John Lennon just two days before the release of his latest album Kisses on the Bottom.

While he is the last Beatle to get the award, fellow musician Neil Young said that McCartney is definitely at the top of his game.

“Like Charlie Chaplin was a great actor, that’s how I look at Paul — he’s at the top,” Young said while introducing the icon. “And yet even with all of that craft that he has and his ability to put melodies and chords and feelings together, it’s the soul that comes out of his music and everything that he does that makes me feel so good and so happy to be here with him and honor him today.”

McCartney wouldn’t dream of lapping up the attention for himself, though. After all, there were three other members in the band that made him a household name.

“Way back in history, in Liverpool when we were kids and we were listening to Buddy Holly and all the rock ‘n’ roll greats, I would have never thought that the day would come when I’d be getting a star on the Hollywood Walk of Fame,” McCartney said. “That was like an impossible thing to happen. But here we are today, and it’s happening. But I couldn’t have done it without, certainly, three boys — so I want to say thanks to those guys, John, George and Ringo … I couldn’t have done it without them, so I want to thank those guys and bless them for being in my life.”

If you travel to Hollywood, you’ll find McCartney’s star right next to those of Lennon, Starr and Harrison in front of the Capitol Records building.